With so much news of arts programs shutting down, it's refreshing to hear about one starting up. Testperformancetest is a multiyear program that will bring national and international performance work to Austin and occasionally commission new work performed in Austin. Arts patron Julie Thornton is the engine behind the program, which is no surprise if you know her work on the boards of Ballet Austin, the Blanton Museum of Art, Artpace in San Antonio, Performa in Manhattan, and Arthouse: She has a passion for cutting-edge art and will do what it takes to get the best of it shown in Austin. The first round of testperformancetest, which is being produced in conjunction with the Fusebox Festival, makes clear what that means. The four-performance series includes:

• Geisha, a trio with a sexy, raw edge from contemporary dance troupe LeeSaar the Company. April 30-May 2, Thursday-Saturday, 7pm, at Salvage Vanguard Theater, 2803 Manor Rd. Admission is $15 (pay what you wish for artists and students).

In addition, LeeSaar the Company will be in residence during Fusebox creating a new work co-commissioned by Performance Space 122, Fusebox, and testperformancetest, with support from a Guggenheim fellowship for choreography. A free open rehearsal/public showing of the piece will be held Sunday, April 26, 2pm. The work will premiere in November 2009 at Performance Space 122 and be shown in Austin during Fusebox 2010. The company will also offer free daily training for dancers of all levels April 17-27. Monday-Friday, 9:30-10:30am. 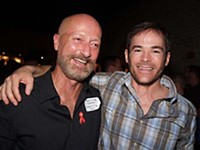