Both dances in the show have great music, but only one delivers great choreography 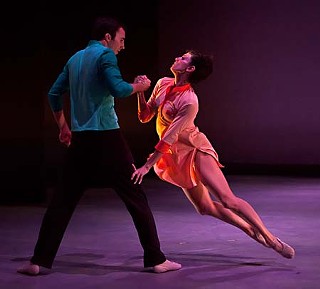 Seeing dance in Ballet Austin's 287-seat studio theatre is a treat if, like me, you often find yourself hiking to the upper balcony in larger venues. The facility is perfect for spare, small-scale pieces such as Nicolo Fonte's 2003 "Left Unsaid," a pool of fresh, intimate choreographic language for six dancers and three chairs. Set to gorgeous (recorded) Bach violin solos, the piece ripples with playfulness and sexual tension. Fonte, a native Brooklynite who worked with the Spanish choreographer Nacho Duato, shows European influence in the quiet design and matter-of-factness of "Left Unsaid."

In a section for the women, musical phrasing is reflected when Allisyn Paino, Ashley Lynn, and Aara Krumpe punctuate movements by lilting their heads or elbows in a unison direction. The effect is a visual fermata with gentle humor, especially when the women rest their elbows in finality on the upended feet of the men. Next, legato tension in the music is translated into struggles more micro in a duet for Paino and Frank Shott, until the couple sat inches apart, facing each other with an energy almost tantric. Edward Carr and Paul Michael Bloodgood cutely encourage the meeting by placing the chairs and turning the couple's heads to face each other.

The fourth section places Krumpe somewhat in the care of the three men, who alternately help her out of precarious situations – such as nearly teetering off a chair – and ignore her. The use of chairs as props for dance has long been a red flag for cliché, and while the final section did give the men a Gene Kelly step-over, the additional visual level is welcome when the dancers walk across and balance on them.

Sadly, cliché isn't avoided in "Songs of Innuendo," a premiere by Stephen Mills. A collection of stagified social dances to classic soul, it is not much different from the kind of dance you can see on prime-time TV. The dancers look uncomfortable in the uninteresting choreography, smile too much, let their technique slide, or all of the above. The exception is Paino, who, in her orange tonal shirtdress (costumes by Susan Branch Towne), grooves full out in complete cahoots with the Etta James' version of "I Just Want to Make Love to You."

A section to James Brown's "Sex Machine" seems to lack sex so completely that I found myself pondering alternative interpretations of the song. When that section was over, I was relieved to see Paino onstage again for a final melancholy duet with Carr to Aretha Franklin's "Ain't No Way." However, after this change in tone, the ballet ends abruptly.

I should mention that, having also sat through Alvin Ailey American Dance Theater's "Suite Otis" (as in Redding) a couple of days earlier, "Songs of Innuendo" put me on overload with dances to great music but little choreographic art. Yes, the music stirs the gut and makes you want to move, but there has to be something else – some sort of alchemy of technique and art – to call it contemporary ballet. For me, "Left Unsaid" had this; "Songs of Innuendo," unfortunately, did not.