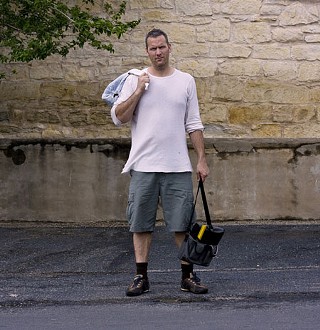 The Soto Zen master Tosui Unkei deserted his 17th century monastic life for unbridled freedom on the outside. He embarked on a new life of "oneness with the principles of cosmic play." He didn't abandon spirituality but rather the traditional form in which it was practiced. His journey was rewarded with renewed awareness and deep learning because he was willing to leave behind the established system.

Systems can provide a helpful pre-existing framework. There is little reason to reinvent the wheel. They provide focus and organization, although they can be inhibiting, just as an entrenched routine can be stifling. Systems also act as gatekeepers and without fresh input become lethargic machines. Such could be said about the art world system, long ago clogged with the pursuit of status and commerce. It has become a system for the business of art, removed from the art itself.

During a recent studio visit with University of Texas professor of art Michael Mogavero, I asked him about his new work in context of exhibiting it in a gallery. He replied, "I thought we were having a discussion about art." I thought it was an odd statement and continued on. Later, I asked him a similar question, and again he replied, "We're back to the business of art again?" When I left his studio, I couldn't stop wondering why he was so adamant about making such a point.

It took me several months to understand it. The creative process is the fundamental component of the artist's journey. The act of self-expression is enough, and using any other parameters to define one's success is useless. Ultimately the artist needs to stay on track and ignore the marketplace. The artist makes art, and that is a big enough task on its own. Beyond self-expression, the artist is communicating to others. The traditional conduit or system deemed acceptable for doing that is the gallery exhibition. The more prestigious the gallery, the greater chance the artist will be accepted. At higher levels, the art becomes positioned, packaged, and sold as commodity. The art business is big business and has little room for the artist's original spirit. Eventually the art becomes collected or, in many cases, becomes a prized possession. A collector would never say: "Come see this arresting painting of this dancer at the edge of the rehearsal studio. The emotional intensity is breathtaking." Instead, he says, "I own a Degas." And invariably the response is, "Wow, you have a Degas."

An artist engaging in the business of art can be a distraction as Mogavero warned, inhibiting cosmic play. What would happen if artists paid little attention to the art system and returned to the basics: self-expression and community? It is an engaging concept, and two artists in Austin, Russ Freeland and Christopher Fitzgerald, are concurrently pursuing what it means to make and share art. For completely different reasons, they are working underground, yet oddly enough, their work is accessible and populist. Both seem to be on a quest to define their creativity and the method in which it is distributed and shared.

Last October, Freeland boarded a plane in Boston with a self-imposed manifesto. He would come to Austin and try to make his living solely from his art. He would not accept charity, barter, or sell his creative services or artwork for more than their worth, and he would not rely on any one person for more than three days. Somewhere during his journey, he would leave a $100 tip and leave Austin after he obtained a gallery exhibition. Freeland landed at Austin-Bergstrom International Airport without 1 cent in his pocket.

Freeland dreamed up his Absolute Zero Project to learn if he could manifest a sustaining life supported only by his art. He rid himself of all possessions with the exception of the clothes on his back, an extra pair of socks, a prepaid Skype phone, and a camera to document his project. "The message I am trying to portray is anyone could do this, the notion of following what you believe in, be it a juggler or cabinetmaker," he says. Before arriving in Austin, he purposefully resisted researching the city because he wanted it to unfold organically before him. "Looking back, I'll be glad I did it," he says. "It confirmed that one's internal compass, guided by creativity, ethics, beauty, and treating others kindly, is so much more important than the external compass that drives society, such as possessions, greed, jealousy."

Since October, Freeland has made hundreds of drawings and paintings in exchange for using someone's computer, a meal, or a place to stay. He struck gold at Townhollow, a small South Austin apartment complex. He estimates that he connected with 20 different people there, and all of them have his work now from trade. There was such an outpouring of support for him that eventually Freeland had to move on. "It was getting too easy," he says. "Everyone was so generous and open there. I had to go because I was getting too complacent."

Although Freeland has been surprised at how generous strangers can be, the project has led him to sleep outside on more than a few cold nights. "I always leave a few dollars in my pocket because, if worse came to worse, I could buy myself some bulk oatmeal at Whole Foods and make it in the microwave at the front of the store," Freeland says.

"With the knowledge I have now, I would have set more difficult perimeters. The bottom line is, regardless if you have nothing or are already established, it comes down to motivation. That is what moves people forward. The Absolute Zero Project was a way for me to reduce all the external trappings and assets, which I now understand can trick you into falsehood. Once you have them, you are fearful of losing them, and how you approach life is completely altered."

Eventually, Freeland will return to Boston but not before he leaves his $100 tip and displays his work in a gallery. "Initially, I made up these two challenges because I thought they would be very hard to accomplish. The gallery idea seems so static to me at this point, but I want to complete the project's goals," Freeland says. "I have never had anything to do with the art world per se, as my world has always been art on the street and in the community. Sharing the work this way will be good." When Freeland shows his work at the Pump Project Art Complex's Texas Biennial Closing Gala on Saturday, April 11, 7-10pm, he'll be able to cross that challenge off the list. He'll need to save up for a plane ticket and leave that large tip. Then he can return back home feeling like he truly accomplished a feat.

Christopher Fitzgerald has been placing small exquisite paintings around the world for anyone to find by chance. They are set out in public spaces for the random passerby to discover. The backside of the painting details instructions that request the finder to keep the artwork for 30 days and then release it once again into the public. Now Fitzgerald has his sights on Austin and is painting away, accumulating stacks of them to distribute.

Fitzgerald is a painter's painter and one of the best under-the-radar artists in Austin. He is always questing, grappling with issues of aesthetics and context inside and out of the studio. His project, Finding a Fitzgerald, was a response to the artist's own internal questioning. It is by no means a gimmick or an act of self-promotion, although at first glance it might appear as such. "My first solo show opened in Seattle during the infamous World Trade Organization riots around the corner from the gallery," Fitzgerald says. "There I was, with a sold-out exhibition and riots outside the gallery doors. It just didn't add up. I knew there had to be something more."

For several years, Fitzgerald struggled with the challenge of how to reach beyond the gallery walls. Eventually, he hit upon the idea of Finding a Fitzgerald. He explains: "I am expanding the circle and art's capacity to connect. Obviously, the world is hurting, and I asked, 'What can I do to give back?'"

For the past year, Fitzgerald has been giving hundreds of these small paintings to traveling friends to be placed in cities where they live or visit. "Someone I knew was traveling to China for the Olympics, so I gave him several. Other travelers have taken them to Belgium, Russia, and Brazil. I find the method of distribution as interesting as the artwork itself. My cousin placed them around Los Angeles through his company's towing service."

Finders are asked to log their finds on the project's website so each work can be tracked from its point of origin. Speaker was first placed in New York, rediscovered in Las Vegas, then Houston, and ironically ended up back in New York. Although very few log their magical finds, the entries are an interesting read. Terri Street in Raleigh, N.C., wrote: "An uplifting moment to receive a small temporary treasure."

Fitzgerald is now focused on Austin and has begun to place the work here. "Traditional painting is a one-to-one experience: You have the viewer and the painting, the aspect for self-reflection. I am trying a distribution method that encompasses this."

Fitzgerald is also concerned with commodity and possession. "Americans own what we find. The mandate of the project denotes giving it away, and that's difficult. Personally, if I found one, I would have a tough time letting it go," he says. "What I really like is the leveled playing field. Finding this work is only by chance, not because you have the financial means to acquire or collect art."

Both Freeland and Fitzgerald have embarked on a new life of "oneness with the principles of cosmic play." Both are on a journey working outside the system, and it is teaching them new perspectives about creativity, community, and the true value of art.

The great difference between Unkei's 17th century journey and Freeland's and Fitzgerald's in the present day is that the current projects can be viewed and tracked online. Unkei would be proud of Freeland's and Fitzgerald's cosmic play. Their projects ask each of us to re-evaluate seeing art as product and return to the artist's spirit. It is that spirit through which we'll reach enlightenment together.

'Paintings by Christopher Fitzgerald'
Diaz Gallery was formed as a labor of love by Adam Diaz, a friendly soul who seeks to represent those artists who are passionate and involved with their work