Long Center for the Performing Arts: Light that first candle!

As the performing arts venue turns one, Marvin Hamlisch sings "happy birthday" to it

If you needed a word to describe the Long Center for the Performing Arts' first 12 months, I think "busy" would work pretty well. Let's see ... Yo-Yo Ma and the Austin Symphony Orchestra. Sir James Galway and the Austin Symphony Orchestra. Austin Lyric Opera's The Bat and Cinderella and Rigoletto. Eight hundred eighty-one "zombies" doing the "Thriller" dance on the City Terrace. Rude Mechs' The Method Gun. Ballet Austin and the Suzanne Farrell Ballet (not to mention Hamlet and Don Quixote and The Nutcracker). Paul Beutel joining the staff as managing director. The Travis County Dems' Election Night party. The Fusebox Festival. Austin Shakespeare's Macbeth and An Ideal Husband. Video Games Live. A Bronx Tale. Conspirare's Verdi Requiem and Christmas at the Carillon. Teatro Vivo's Fantasmaville. Tapestry Dance Company's From Head to Toe. Cirque Dreams. A Ride With Bob. The Chronicle's "Best of Austin" party (with a few awards for the Long Center itself).

That's far from everything, but you get the idea. So much has gone on there that it seems as if the place has been operating for ages (and you can be sure the people on the inside feel like it's been a lot longer than a year). And even when you include those moments that maybe the venue staff would sooner forget (the parking clusterfrak during ALO's Carmen, the memo from Executive Director Cliff Redd to City Manager Marc Ott, Redd's heart attack, the cancellation of The Drowsy Chaperone, the economy tanking), it's been a year that shows just how much this facility can add to Austin's cultural landscape. And that's worth celebrating. Which is just what the Long Center plans to do this week. To sing the center "Happy Birthday" in style, composer/performer Marvin Hamlisch and incomparable singer Linda Eder are headlining a gala concert with a 32-member orchestra. There will be a preconcert party, and you can be assured of cake (or at least cupcakes) afterward, with entertainment by Stuart Moulton of Austin Cabaret Theatre. So join the party and help wish the Long Center many more years of busyness.

Marvin Hamlisch and Linda Eder perform in concert Thursday, March 26, 8pm, in Dell Hall at the Long Center, 701 W. Riverside. A preconcert party on City Terrace begins at 7:15pm, and a Champagne and cupcake afterparty will be held at 9:30pm. For more information, visit www.thelongcenter.org. 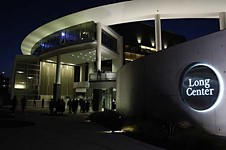