The veteran stand-up comic isn't a rock star, but he played one on TV 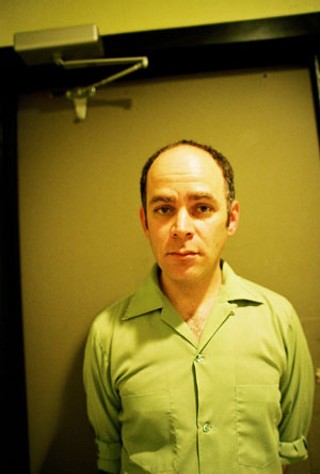 Like a librarian's hushed incantations, veteran comedian Todd Barry's bubble-level steady and bone-dry delivery quietly rages. Cataloging observational absurdities with a writerly precision and curmudgeon's charm, the New York native is reliably one of stand-up's funniest and most engaging performers. The Chronicle recently checked in with Barry prior to disembarking for our River City.

Austin Chronicle:Be it genuine appreciation or pure pandering, some touring comics and bands compliment an aspect of the town where they're performing. Instead, what constructive criticism can you give Austin and/or South by Southwest?

TB: I really don't have anything bad to say about Austin, but I've never found much to do in Cincinnati. Any tips?

AC: You've opened for Yo La Tengo, the Shins, Aimee Mann; toured with Jens Lekman; and played bongos with Flight of the Conchords. I'm not suggesting you're hopping on any, uh, bandwagon, but what do you think about this notion that many comics are closet would-be rock stars?

TB: I've heard that comics want to be rock stars and rock stars want to be comics. I've been in bands, and I miss looking out into a crowd of people and watching them watching you, which is harder to do when you're talking nonstop. And I guess if I was in a band, traveling five hours a day in a van with four sweaty assholes who used to be my friends, then I might want to travel alone and tell some jokes. I guess "Weird Al" Yankovic has the best of both worlds.

AC: How much public recognition do you think you receive from your role in "The Third Conchord" episode of HBO's Flight of the Conchords compared to, say, everything else you've done in the last two decades?

TB: A disproportionate amount of my insane fan encounters are the result of that show. Before I did it, I would have the occasional person come up to me and say, "You're funny" or "Hey, you're a comedian, right?" But then I became this guy from a TV show, and not everyone knew I did stand-up. So people come up to me and say things like, "Where are your bongos?" Then I have to tell them that that was an acting role, and if it wasn't, I probably wouldn't bring them to the laundromat.

AC: You played a great Lucky No. 7 on Sesame Street. Though your scene didn't involve direct collaboration, the Chronicle – okay, just me – loves juicy Muppet gossip. Can you hook a brother up?

TB: As you said, I wasn't in a scene with the Muppets, but the Cookie Monster popped his head in my dressing room and said hello. I still get the occasional e-mail from him, actually. The Cookie Monster was a Muppet, right?

AC: Besides performing, what are you looking forward to at this year's South by Southwest?

TB: There's a really good hot-dog stand. I think it's near Emo's. It has a name that's sort of funny, or punny. Anyway, I'm looking forward to going there.