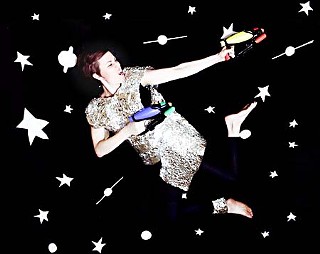 The Off Center, through March 7

The Warpstar Sexysquad's mission is to preserve quantum pinpoints, meaningless moments in history that, if erased, could destroy the fabric of the universe. Its weapons are oversized cardboard cutouts pulled off the wall. Their foes are a jilted ex-teammate who speaks in a faux British accent and Dr. Snuggles, a mutated cat who speaks predominantly in Star Wars quotes. The fourth wall has several doors, and, oh yeah, the entire production is also a drinking game. Did Captain Flash T. Skywalker just say "quantum pinpoint"? Bottoms up.

Just another night of theatre, right? Yellow Tape Construction Company bills Warpstar Sexysquad as "a sci-fi action-adventure musical comedy," and indeed I would bring up Spaceballs, Star Wars, Star Trek, and a host of other movies and pop-culture references before I'd link Warpstar to another play (save Yellow Tape's own Christmas musical last year).

The jokey references/homages fly hot and heavy in Warpstar – not just to sci-fi films such as Ghostbusters or Back to the Future but also Top Gun, This Is Spinal Tap, and Wet Hot American Summer. Add jokes about Sarah Palin, Christian Bale's tirade on YouTube, and Gossip Girl, and that's a potent pop-culture cocktail you're dealing with.

Frequently when I see a show, I think about whether or not it's Theatre, capital "T"; whether the play is a piece of art or has meaning; and so forth. Well, Warpstar Sexysquad is not Theatre with a capital "T," but is that really a problem? What it is is damn entertaining and damn hilarious.

The folks at Yellow Tape go all out to make Warpstar an over-the-top, rockin' homage to the sci-fi genre, and they succeed in drawing the audience in by making the show into a drinking game and asking for audience suggestions like an improv troupe. The fourth wall gets broken not so much in the pursuit of self-reference but in the pursuit of more laughter.

There is an earnestness in the actors' performance of Warpstar that you don't always see – they've worked hard to have a good time themselves as well as make sure the audience has a good time. And though that might be an aim of many a theatre troupe, I doubt many of them succeed so wholly as Yellow Tape in Warpstar Sexysquad.

I admit that I'm part of the demographic this show is tailored for: a twentysomething who enjoys comic books, drinking, film, and theatre in equal measures (you know, one of the cool kids). If you're looking for theatre with a capital "T," then this might not be the show for you. But if you're up for sketchlike comedy, grooving music, and a silly, good time, then the crew of the Warpstar Sexysquad has a mission for you.