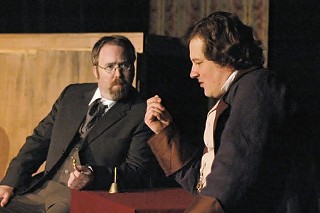 Right after taking a light dose of cocaine and before wading into a murderous setup, Sherlock Holmes opines to his dear chum Dr. Watson that the only reason he does what he does is "to escape the dreariness of commonplace." And that's precisely what has brought people to the legendary detective for more than a century: the intrigue, the diabolical plots, the nervy escapes, and Holmes' ability to deduce the most difficult of cases. It's fantasy, and we've loved, paid tribute to, and retold Holmes' tales for generations.

Weird City Theatre resurrects William Gillette's legendary production of Sherlock Holmes, a play that helped propel the character to the fame he now holds. The script highlights the rivalry between Holmes and repudiated archnemesis Professor Moriarty. A girl attempting to extort revenge on the man that led her sister to suicide is herself being extorted by a couple of cons. When Holmes begins to meddle in the third-rate criminals' plans, they call Moriarty, and the big-picture chess match comes into play.

Artistic Director John Carroll is the lead in Patti Neff-Tiven's production, and he brings a gravitas to the stage true to Sir Arthur Conan Doyle's original character. While most conceptions portray Holmes as a cerebral sort replete with deerstalker hat and magnifying glass, Carroll dominates any scene he's in. His Holmes speaks boldly and directly, is quick off the boil; he's threatening and incredibly contemptuous, a know-it-all, a man riding just in front of a wave of personal turmoil.

Indeed, Carroll's Holmes seems to be roughly 7,000 steps ahead of the incompetent rogues trying to do him in. Moriarty is often portrayed as a criminal mastermind – "the Napoleon of Crime," according to the detective – but John Smith's portrayal makes the character closer to a young and impetuous Mafia boss who growls at his underlings.

Now if anyone was going to kill Holmes (again, considering he first did it in Doyle's "The Adventure of the Final Problem," only for that to be rescinded), it's Moriarty. But despite several guns being pulled on his person, despite being lured into a dark gas chamber full of foes ready to kill him, there's never any real threat to Holmes. Surely part of this is his arrogance. But pit a detective of near-supernatural deductive capabilities against a crew of hapless cronies, and, well, the result is never much in doubt.

Just as Merry Wives of Windsor makes the most of the caricature of Falstaff, so Holmes the play accentuates the greatest of the detective's abilities, making him a hyperobservant know-it-all bordering on a magician. But that's what the crime story gives us: a whiff of reality enshrouded with mystery, the hint of violence and danger, the knowledge that good triumphs over evil. It's elementary, after all.