An atypically reflective evening of experiments, explorations, and excerpts 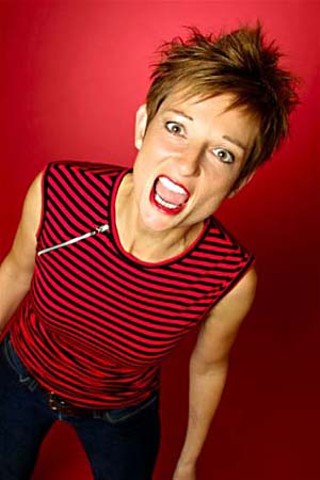 Maggie Gallant's excerpt of 'Our Angle in Heaven'

Absent the boisterous improv or spoken word often associated with the Short Fringe, the Best of Week Three was a quiet, reflective evening of experiments and explorations and excerpts.

There were moments of honest laughter and provoked thoughts, but in general you left the theatre wanting a bit more.

The night began with the most complete work, "Lascivious Lunches and Decadent Dinners," by Priscilla Sample. We moved backward and forward in time as we learned that a man had suffocated to death and his baker wife may have leveraged her knowledge of his whey allergy to commit murder. Paula E. Brooks was a compelling heroine. The story, though not exactly gripping, was enough to keep you interested in whodunit.

Next, Maggie Gallant presented an excerpt from her Long Fringe solo show, Our Angle in Heaven. She treated the audience to three Brits offering various responses to Princess Di's untimely demise: Jane, a Diana impersonator who felt very close to the woman she pretends to be; Catherine, a young girl who longs to be a boy and doesn't give a shit about the death of some fluffy princess; and – best of the three – Barry, a conspiracy theorist who believes the royal family is a race of reptilian humanoids. Gallant has a charismatic quirkiness and lovingly inhabits her characters.

"Folding House," a work in progress written and performed by Sheila Gordon, held the most theatrical promise of the evening. Gordon is doing interesting work with transitions and settings and character. Her voice is a great gift and was spot-on whether she was evoking a planetarium, running an auction, or playing an old man who has suffered a stroke and is relearning speech. In a particularly moving scene, her old man sorts through a box of medicine, trying to remember which he has taken and which need taking. A really exciting start to a piece I look forward to seeing in full.

In "TBA," an experiment by Stephen Pruitt, each audience member received a radio and headphones. A lullaby began. We sat in the dark and listened via radio to Pruitt stream consciousness on the meaning of the words "to be announced." He reflected on how life is full of things that are TBA, but often they never are announced; they just happen. He talked about how the deejay's personality used to matter, but now the only freedom to be found on the radio comes during the programs aired around 4am. Radio waves became a metaphor for human existence. When the lights came back on, we were almost reluctant to relinquish our radios, so pleasant was the experience.

The night ended with another short play, the raucous and almost awesome "Nine Hundred Pound Goose," written and directed by Walter Miranda. This piece had a lot going for it – a funny cast, push-up bras, wacky humor – but in the end, this exploration of guardian angels and guardian demons couldn't quite figure out how to seal the deal.

So whether we were made to think back on a sad event from 1997 or the freedom of radio deejays of old, to ponder conspiracy theories and deadly allergies and fate, or to wonder what a play might look like once it's fully realized, the atmosphere at Hyde Park Theatre was thoughtful. Best of Week Three provided a passably enjoyable night and a quiet car ride home.