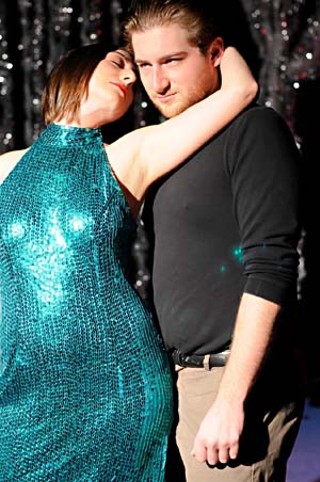 I once listened to Salman Rushdie refer to a three-page Colombian short story that did nothing but describe an earthquake erupting and destroying a city.

Although the story was the antithesis of his sprawling, grand novels, he was enthralled by the quick fury with which the tale was told. Roundabout point being: From the short spectacle to the elaborate epic, the dance piece to the philosophical ponderings to the improv, FronteraFest's Short Fringe offers its audiences the full theatrical buffet.

It really is a testament to the broad spectrum of the Austin arts scene's creativity. The five pieces put together for Thursday's lineup could not have been more different from one another. Bastion Carboni's "A Cure for Boredom," which led off the night, fell more into the short spectacle category. The setup comes from one of any teen horror films: A horny young couple escapes to a secluded spot for some lovemaking, only the spot isn't as secluded as it seems. In this case, a suicide case – think Woody Allen with a sneering Jack Nicholson twist – gets in the way of their coupling and everyday thinking.

This was followed up by 30 minutes of the wonderful improvisational stylings of Girltrap. Girltrap consists of ColdTowne graduates Brent Foshee and Josh Krilov, who showed a remarkable level of understanding and had the straight-man routine down to a T, allowing both players the chance to riff on some wild, hilarious characters. They had the audience in stitches with their crazy, misunderstanding fools, which made now-former President Bush an appropriate cameo.

Todo Big Time's "Don't Eat Tomatoes Before Bed or You Will Have Nightmares" followed Girltrap with an engrossing piece of social theatre. Most social theatre I've seen gets caught up in symbolism or is too heavy-handed or forgoes theatrical necessities like plot or drama to deliver its message. Adam Martinez and Isabelle Salazar's production was full of dreams, humor, wacky characters, and a real playfulness, but rather than cheapening their message, their strong theatrical sense heightened what they were trying to say.

From one bilingual piece to another: the lounge act Le Sexy. Dripping with faux French accents and eroticism, singer Stephanie Russo and pianist Jason Laney worked through a number of songs such as "House of the Rising Sun" and "One." While the performers are a fictional romantic duo, they had to deal with Russo's amorous interaction with semiwilling participants from the audience, which kept the rest of us howling.

The night ended with Sarah Saltwick's "She Creatures: Scenes of Mythic Women." The main characters of the two pieces were a siren and a selkie (like a mermaid), respectively, and the show dealt with their attempted integrations into humanity's world. Well, more accurately they dealt with a man's world, as both mythical ladies had formed bonds with some male landlubbers. Special mention goes to Gina Houston's riveting performance of Cecilia, the selkie who struggles to understand the civilized world.

It was a beautiful night of theatre, full of the unexpected surprises that make FronteraFest worth going to again and again. Two of these submissions were nominated for Best of the Week, two more were deserving, and while it might not be the case, I hope every night of FronteraFest was as wonderful as this one.