If you don't laugh, the terrorists have already won 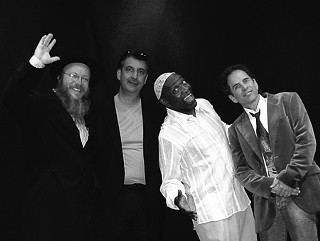 An Israeli and a Palestinian walk into a bar.

Okay, no, wait, I got that wrong. Hold on – is it two Israelis? No, wait – it's three, isn't it? Yeah, that's it: three Israelis. And a Palestinian. And they're not walking into a bar, no, they're walking into the Jewish Community Association of Austin.

And they're not actually from Israel or Palestine, these guys, they're all definitely Americans, but they're of Israeli heritage. Except for the Palestinian, of course, whose heritage is, well, you get the idea. Yeah, and he likes to refer to the other three as "hostages." Seriously.

A real riot, these wisenheimers, lemme tell you. You'll plotz.

Yisrael Campbell, Aaron Freeman, Charley Warady, and (Marhaba!) Ray Hanania: These four guys are comedians, professional stand-up funnymen, and they tour the country (and beyond – to Jerusalem, even) cracking wise about the various ethnic trials and tribulations of life as hyphenated Americans but especially about the seemingly interminable Israeli-Palestinian conflict.

You'd think a show like this might not do well. You'd think a show like this might, ah, bomb. But from all reports, these guys – oh, the slang of the entertainment world! – these guys kill. That's partly because they've honed their respective solo acts for years before joining forces for this united front of humor. Campbell, born Catholic but later converted to Orthodox Judaism, also works his schtick in solo shows such as It's Not in Heaven and the upcoming You Can Never Be Too Jewish; Freeman, another convert (and African-American besides), is a frequent commentator on NPR's All Things Considered; Warady plied his Jewish gags in gigs on campuses across the U.S. and on Comedy Central before actually emigrating to Israel in 1998; Hanania is a comedian and a columnist for both Saudi Arabia's Arab News and Israel's Jerusalem Post. Together, these men are a live comedy version of the Four Horsemen of the – uh, on second thought, let's set that metaphor aside for another time. But here they come, the Israeli/Palestinian Comedy Tour, ready to shatter the tensions of political and military and cultural aggression with a few swift salvos of laughter.

Please note: Any rumors that the current escalation of violence and heavy warfare along the Gaza Strip is part of a clever cross-media publicity campaign for this show ... well, those rumors were as yet unconfirmed at press time. And check your weapons at the door.