A Revolution of Spirit 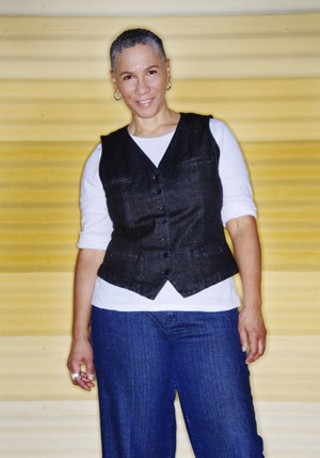 'i remember i born'

Deltas are those places where rivers pour into the ocean. Light blurs, birds congregate, and things change. The South is full of them. It's good to sit down on a log at a delta to look at your hands or the sky. Sometimes you hear messages, decode mysteries, and feel the future from there.

The performance piece delta dandi is one such place. This new work from writer and ritual jazz theatre artist Sharon Bridgforth opens with the main character of the Gurl giving birth – to her mother.

The Gurl is trying to save her own life. She must make her way through slavery to freedom by learning how to relate to the spirits, ancestors, and her inner voices – and by using her powers of love.

In the playwright's words, "delta dandi asks how does collective grief and trauma inform the Black-American experience and what must a Soul do to heal."

The cast of delta dandi dances, reads, sings, chants, and makes ritual on a stage set with light and shadow. Three acclaimed stage artists from New York and six younger performers from Texas and California evoke the delta where modern black Americans meet ancestors in the spirit world to learn how survival, creativity, and love intertwine.

'she stomp each note right to heaven'

In 1997, Chronicle writer Kate X Messer wrote, "If you've never seen [Bridgforth's] work, now's the time to get out from under that rock." If you still haven't, this may be your last chance to see it in Austin: After 15 years of artistic craft and collaboration here, Bridgforth is heading back to her family home of Los Angeles.

trying to git a bone or two

freedom on a bed of posies/trouble

made me want her

befo I ever saw her face she

from side to side

Bridgforth started writing at age 15. "I was depressed, and in retrospect, from being queer. I was reading the Song of Solomon from the Bible – the Psalms. They were so beautiful that they moved me to start writing poetry. From then on, it just became like breathing.

"The way that I make work is to re-create the sounds of the parties and gatherings we would have when I was a child. I have the most beautiful memories of these fine, young black people and dancing and food and singing. They told stories, there were many things happening at the same time, and I knew I was loved. That feeling, that sound – finger-popping, as my mom would call it – that shaped how I create."

In the words of Dr. Joni Jones/Omi Osun Olomo, the leading scholar on the theatrical jazz aesthetic and director of UT's Warfield Center for African & African American Studies, "Bridgforth's work creates a black experience, with black speech, where blackness is absolutely valorized – not glorified – but is given its beauty in all of its complexity. And that can be mighty rare."

'i hang my shingle out at sunrise/for all to see'

When she moved to Austin in 1989 with her 7-year-old daughter, Sonja, Bridgforth had "suitcases of writing that I'd never done a damn thing with." She walked into the Foundation for a Compassionate Society's Peace Building on Congress Avenue, which housed numerous radical organizations – the Austin Latina/o Lesbian and Gay Organization, the American Friends Service Committee, the United Farmworkers, Ebony Connection, and others – and that situation swiftly changed.

"I came into that building looking for the queer people. But I discovered the idea of art as a vehicle for social justice and the people who would be key for me in finding language for myself as an artist." When Bridgforth met Austin's arts activist community, she was home.

Before bull-jean was published, Bridgforth founded root wm'yn theatre company, which toured her poem-plays in mostly small venues, mostly on her own dime, for five years. She worked full time as a public-health educator, hosted two radio shows, curated an arts series, and raised her daughter. (See "Art + Activism Intertwined.") After bull-jean established her as a literary figure, Bridgforth's mission crystallized: "the jazz of my work assumes that art and Life are not separate; that artists are responsible to community; that art is about innovation."

Dr. Jones, Bridgforth's champion and collaborator, says: "Sharon has transformed the lives of so many people here! But she is moving into a whole new world of desire. She is being much more articulate and bold. I think she wants her work everywhere."

Bridgforth confirms that desire: "My dream is to have my work fully produced and toured around the world."

Will Austin miss her? Yes. But Bridgforth has taught at least 100 younger writers, who will carry the torch of art and activism locally.

Will she miss Austin? Yes. "I've been loved and held and supported in Austin in a profound way," Bridgforth says. "People offered themselves to me. It is a beautiful city that's focused on wellness. I was able to find myself here."

One lesson of Bridgforth's biography is that "finding oneself" is, in large part, about finding others who can see you. The extraordinary caliber of the artists coming here to do delta dandi demonstrates how rooted Bridgforth's work is now in a national theatre scene. Helga Davis, Baraka de Soleil, and Sonja Perryman (Bridgforth's daughter) have been conjured here from New York, and other performers came from Los Angeles and Houston for the two-week rehearsal-to-performance sprint.

An acclaimed stage talent with operatic vocal range, Davis currently co-stars in the European tour of The Blue Planet, a multimedia theatre piece written by Peter Greenaway. She's a woman of expressive energy who talks like a living exclamation mark. She exhorts the cast to "sing it from your pelvis! Feel it in your sex – it's not sex, but it comes from the same place, people! It's life! Don't miss it! Don't drop it!"

Brooklyn-based dancer de Soleil is the founder of D UNDERBELLY, a performance-art company and network for black artists. Exactly half of his head is shaved in a style he calls "the African mohawk, my homage to Basquiat."

De Soleil is training the delta dandi artists in movement traditions rooted in Africa, such as the ring shout, in which dancers bend low to the ground, move in a counterclockwise circle, slap rhythms into the earth with their feet, and vocalize in call-and-response. An ecstatic spiritual dance form, it comes grippingly alive onstage in delta dandi.

Afterward, de Soleil coaches the performers: "If you walk back to the plantation after that ritual showing what you know and carrying what you just learned there around that fire, you not gonna live! You will be killed! You need to change your gait now. You are crossing a threshold!"

De Soleil's concept of blood memory of the Middle Passage – the forced migration of more than 40 million Africans during the European slave trade – informs his choreography. "Blood memory is deeper than muscle memory," he says. "Muscle memory is personal; blood memory is ancestral. Blood memory goes back to the beginning of time. When we don't release old stuff, it creates points of pain. So performatively, we're oxygenating memory and moving it along. Blood memory is deadly when it is stagnant."

This, then, is a central theme of delta dandi: transforming the "thunder of memory." "All of the voices are the Gurl in different time dimensions," says Bridgforth. "Her past/present/future lives are coexisting. Her ancestors and her self and her future descendants are calling her so that she elevates, so that she can release some of the trauma of history. The essence of that girl is me. Every single thing that happens here is to save the Gurl's life for all eternity. She has to become willing to love herself – all parts of herself."

Sorting out who's who in delta dandi is best done with a script in hand, since all the characters are actually aspects of one. Souls transmogrify continually, and there is no distinction between past, present, and future (an element of all theatrical jazz, according to Jones). Blues is represented by a female king who sells the Gurl into slavery, but she's also a hard-drinking juke-joint pianist named Honeypot, "the kind of woman who'll steal your gurlfriend." Above all, Blues is the voice of shame, addiction, and cruelty.

The Gurl (Florinda Bryant) narrates her journey in the present tense, and the Seer (Azure Osborne-Lee) pours forth story and memory. Elder Spirit/Returning, vocalized by Davis, is the bearer of light, love, and unchanging truths: "You are loved. You are not alone. In this moment you are safe." Chorus voices are stationed in the audience, and Spirit/Dancers embody the stories in the center of the stage.

delta dandi builds to a frenzy and crescendos in a love ritual chant, in which all the various elements and characters are embraced and integrated into one:

slave woman shattered I love you.

old man stuttering I love you.

veiled baby I love you.

African King who sold me I love you.

woman praying at the river I love you.

this is where we meet. the shift is now.

the Change has come.

i move from the crossroads

stand where all the rivers meet ...

Watching this work, it is easy to feel like a child, an ancient crone, a slaver, or a slave. It doesn't offer plot logic, and it's nonlinear. The mind is stymied, but the body throbs and chimes. It feels like church, yet you're not sure quite if you're an insider or an outsider. Do divisions like inside and outside hold true here? The answer is for each audience member to discover – and the inquiry is expected. The last line is "ask your question child."

As de Soleil says: "The role of audience is not passive. We turn it inside out. They are an active witness in this ritual, and it activates their own blood memory. Then they are helping to create our new collective memory. The slave and the slave owner, they both have pain. They both have blood memory. And they must both unlock, we all must experience, communicate, and release, to move forward. The moment you make the decision to come to this show, you become a participant in this ritual."