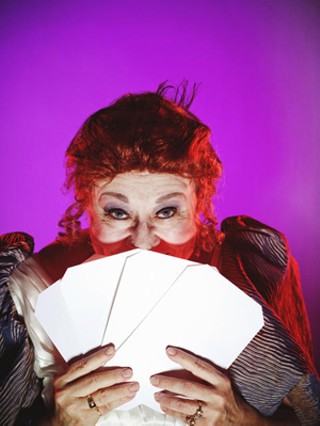 The Casket of Passing Fancy (Photo by Celesta Danger)

1) Cult of Color: Call to Color (Ballet Austin) So Ballet Austin took a creation myth from the complexly warped imagination of visual artist Trenton Doyle Hancock, had composer Graham Reynolds of the Golden Arm Trio write a score, and presented it live with choreography by Stephen Mills? Sure, that's the sort of thing one sees every day, isn't it? Good lord, no, not even in Austin: It was as spectacular and compelling as it was unique, with costumes and movements and music vividly embodying Hancock's trippy vision onstage and providing a glimpse into a weird world beyond our own. Also, we'd give our left nut to own that fully sewn backdrop.

2) "Cynthia Camlin: Extremities" (D Berman Gallery) The immense watercolor depictions of icebergs with visible underpinnings of crystalline structure: the sort of brilliance that breaks our heart like it's another Titanic aching for the ocean floor.

3) "Erin Cone: New Paintings" (Wally Workman Gallery) Wow. Cone wouldn't have to explore the brighter possibilities of framing and graphic balance the way she does; she could simply paint a face, the same face, or the same pair of hands over and over, and we'd be happy to see the results. But she does explore the possibilities, charting new territories of juxtaposition and symmetry among her distilled figurative subjects, and our eyes and minds are ever grateful.

5) Rude Mechanicals strike twice And thank Ceiling Cat for that, because the fubar mother of all traffic snarls thwarted our attendance at the Long Center premiere of The Method Gun this past spring, so we had to settle for the workshop production of the Rudes' newest, a multimedia exploration of parenthood, the Wild West, and how "they fuck you up, your mum and dad" called I've Never Been So Happy. Did we say "settle"? Far from it, actually, as the so-called "workshop" gig was more fully realized and excitingly presented than many companies' full productions. Racing dachshunds FTW!

6) The Casket of Passing Fancy (Rubber Repertory) Speaking of fully realized ... Rubber Rep's Matt Hislope and Josh Meyer teamed with playwright Rebecca Beegle and a handful of talented performers to present what should have been a nightmarish tactical clusterfuck but was more of an extended dream of sensual fulfillment. Their Casket offered 500 separate intimate experiences to its audiences – Nudity! Dancing! Singing! Fire! Bodily fluids! Leeches! – and people are still talking about the wonders and weirdness that went down each night.

7) Dog Sees God: Confessions of a Teenage Blockhead (Hyde Park Theatre) Sometimes you don't need a multiring-circus structure to do well by an audience. Instead, you're Ken Webster directing Bert V. Royal's caustic and hilarious play about what happens to the Peanuts gang in high school and beyond: Then you simply wield the impressive theatrical chops you've honed for decades and present an ensemble of talented newcomers rendering the action of a narrative about modern youth that's almost as insightful as it is funny. To learn that reggae-happy stoner Linus smoked his goddamn blanket ... that's the price of admission right there.

9) Ka-Baam!! (Austin Improv Collective) Asaf Ronen and friends turned the Hideout Theatre into a silver age comic-book fantasy with their series of superhero improvisations that strip-mined the genre for all it was worth, bringing to life scientific heroes, genetically mutated heroes, cosmically radiated heroes, and so on to battle (valiantly) all manner of evil villains and hell-spawned monstrosities. With different improvisers each night, with a talented comic artist sketching characters based on audience suggestions, with Ronen's interstitial evocations of adverts and bull-pen proclamations à la Stan "the Man" Lee, the shows were extremely popular laugh riots.

10) "Monstrosities" (The Museum of Natural and Artificial Ephemerata) Scott Webel and Jen Hirt's house-sized wunderkammer presented an exhibition of physical oddities – a two-headed calf, a duckling with four legs, bioluminescent cat pelt, giant toads and cockroaches, and so on – lovingly arranged and documented for public edification and amusement. And, best of all, on the Saturday tours, the curators personally regaled you with the informative and whimsical backstories of what's on display.