The Austin Statesman's first photographer shot news, but 70 years on, he made history 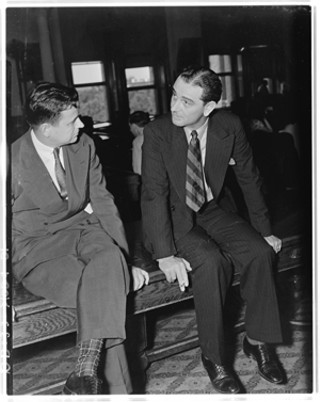 I doubt the late Neal Douglass thought of himself as a historian. Journalists rarely do, despite the cliché that our profession is the "first rough draft of history." We're all about the here and now. We cover our assignment, then move on to the next one.

But over time, somebody finally wants to look back, and yesterday's news becomes today's textbook or museum piece. However much Douglass got paid in 1935 when he took the job as the Austin Statesman's first staff photographer, it couldn't possibly match the debt that today's Austinites owe him for preserving this city's visual history over the next 30 years.

Douglass' work is still on display for a short time at the Austin History Center, and anyone interested in seeing the city that was should make a point to get Downtown. Posted in the front lobby and east hallway, "Austin Americana: The Neal Douglass Photography Collection" takes on the impossible task of covering the breadth of Douglass' work. Being the first shutterbug for the daily paper of course also meant, for a while, that Douglass was the only one. Even in the smaller days of our city, Austin was still big enough to keep Douglass hopping. He seemingly covered everything.

His first shots were of the great 1935 flood, captured here by a touching photo of a young boy carrying a kitten through the water. From there, he went on to shoot politicians and celebrities (his wife-to-be was a desk clerk at the Austin Hotel who would call him whenever a notable checked in), businesses, aerial shots of the ever-changing skyline, musicians, even weddings and social events.

Browsing through this display, old-timers will no doubt have memories flood back, while younger Austinites will finally have a face to put with instantly recognizable names: Yes, Zach Scott and Walter Long were actual people, not just the names of buildings and parks. And there was a music scene before the Armadillo: I don't know much about the Mello-Tones, but judging by their 1958 photo, I'd guess they were pretty swinging. Many subjects are long gone (Sen. Lyndon Johnson and his favorite restaurateur, Rudy Cisneros), a few are still here (the Rev. Dr. Gerald Mann, without his white hair), some are dearly missed institutions (restaurants such as the original Night Hawk and 2-J's), and others have historical value beyond just memories (civil rights pioneers such as the instantly recognizable Heman Sweatt, as well as lesser-knowns such as Emma Dyke, the first black female public accountant, and Virgil Oliver, the first African-American to sit on a jury in the South).

Austin History Center curators must have gone insane picking shots for the collection. Unfortunately, the limited space only allowed them to hit the tip of the iceberg. A fuller, online look at Douglass' stunning body of work is hosted by the University of North Texas' Portal to Texas History website, www.texashistory.unt.edu/browse/collection/NDPC. The 2,111 shots there can cause a history buff to lose an entire day of work. (Ask me how I know.)