A musical whose time has come

Tweet
print
write a letter
New Year's Eve is a bittersweet holiday, a time to reflect on what was and to hope for what may be. So what better way to ring it in than to catch a performance of The Last Five Years, a musical that celebrates both the beginning and the end of a relationship? This lover's tale is told two ways simultaneously: Jamie tells his version forward, Cathy tells her version backward, and at some point during the course of their stories, the lovers meet in the middle. The Chronicle chatted with director Michael McKelvey about his upcoming production of Jason Robert Brown's award-winning musical, a collaborative effort between Austin Playhouse and Penfold Theatre Company that opens on New Year's Eve.

Austin Chronicle: What drew you to The Last Five Years?

Michael McKelvey: I have been a fan of Jason Robert Brown's music for six years or so. This was the show that everyone really loved but no one was producing. It had a kind of cult following. It was through the encouragement of some important people in my life, the generosity of Don Toner and Austin Playhouse, and support of my friends at Penfold that we are able to make this terrific show happen.

AC: How did you deal with the crisscross time structure?

MM: I think that between discussions with the actors and production team we have come up with some very clever ways to handle their two separate worlds while maintaining a connection between them.

AC: A two-person musical is no slight task for the performers. How has it been to work with David Gallagher and Annika Johansson?

MM: They have very strong chemistry. The final callback got a little steamy.

AC: What will this musical teach us about love?

MM: That's a loaded question. My hope is that every show I work on will allow the audience members to learn or reconnect with something in themselves. This show views all of the various sides of a relationship: love, friendship, pain, miscommunication, selfishness, selflessness. You name it, it's in here. I think a lesson I have learned is the necessity for two people to truly be open, communicate, and share. We all talk about it, but to what extent do we really do it?

AC: Any final thoughts on what sets The Last Five Years apart from the crowd?

MM: I just think this is a show that adults, young and old, should see. Composers aren't writing shows with thoughtful adult themes anymore. The only ones I can think of are filled with some poignant songs but surrounded by comedy numbers so the show won't get too heavy. Sure, there are some heavy moments in this show, but they are surrounded by songs that contain clever lyrics and tuneful melodies that you will remember for days following. Here is a chance for people to see a mature evening of music theatre. 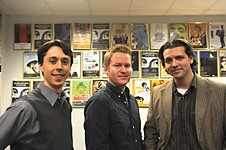