View from the top banana 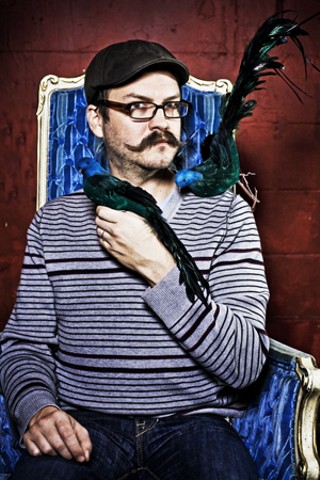 Dust Bowl squalls blasted the makeshift stage between Red River and 12th streets, while the sound of Bouncing Souls bled across the bank of Waller Creek. The bleary-eyed throng (clearly a contingent of cattle rustlers, bandanna-wearing bank robbers, handkerchief-masked anarchists, and Radio-Television-Film undergrads) hung on to the tales imparted by the man with the handlebar mustache. Superficially, the scene was more Steinbeck than Seinfeld, but Okies and teetotalers would have been bummed to find that, rather than a Depression-era tent revival, they had stumbled upon comedian Matt Bearden's commanding Fun Fun Fun Fest set shortly before festival headliners Tim and Eric Awesome Show. This is not to proclaim the Nov. 9 Waterloo Park gig Bearden's greatest performance, but his masterful ability to roll with the punches and win over any "room" allowed him to nimbly hurdle the howling wind, literal mud in the eye, nearby punk raucousness, and some initially ambivalent bodies. It was just another example of Bearden's seasoned chops and one more reason why he was voted Best Comedian in the Chronicle's "Best of Austin" 2008 Readers Poll. "Fun Fun Fun Fest made me wish I had money in the hoodie market," Bearden opines. "Honestly, comedy and the outdoors are hot death. Two days of beer and dust-huffing doesn't help, but I ended up having a blast. Seriously. I love those Red Rivery crowds, especially when a hipster laughs until he pisses his girl-jeans." The comment exposes his typical lack of favored-nation status for punch lines, which includes putting himself squarely in the crosshairs and peppering his act with genuine self-deprecation.

Onstage, Bearden favors long-form routines and is hyperarticulate, speaking quickly and with a slightly nasal cadence tinged with the lightest Southern drawl that is the epitome of Austin slackitude. His father worked in the oil business, so Bearden moved more than a dozen times among his native Houston, Brownsville, and LaFayette, La., before moving to Austin in 1990 to attend the University of Texas. Since then, the comedian has been a linchpin of Austin's improv and stand-up scenes. His improv tenure includes the mid-Nineties troupe Monks' Night Out, as well as tutelage from Mick Napier of Chicago's Second City and Annoyance Theatre and the late Del Close (widely credited as the godfather of contemporary improv).

After playing the character Quinton on the late-Nineties MTV series Austin Stories, Bearden moved to L.A. for a brief stint. He's forthright about being green at the time and playing the Hollywood game poorly, but he realized that even with more showbiz seasoning, he wasn't likely to cotton to the company town. "I remember seeing Zach Galifianakis after he crashed some 'please hire our nonworking talent' showcase some management company hosted. He went up at the end and was far and away my favorite," beams Bearden. "After the show I was eavesdropping on this suit-and-glasses producer type. Zach walks by, and the dude is all, 'That guy was terrible!' People complain a lot about how much crap stand-up is out there, but they're only watching it on TV, and that dude is the one pulling the strings. It's really frustrating."

Upon returning to the town he's always considered home, Bearden became a principal behind the short-lived Bad Dog Comedy Theater (a crown jewel of a club which Bearden is loath to discuss) and pursued stand-up with a renewed fervency. He won the 2002 Funniest Person in Austin contest hosted by Cap City Comedy Club and has since racked up a panoply of film and TV credits, as well as a reputation as a gifted comic and event emcee. Asked about his storytelling style, the thirtysomething newlywed affectedly replies: "I hate answering this question! But I guess my biggest influences are Led Zeppelin, Neutral Milk Hotel, and some jazz giant. There. Does that make my band sound cool? Seriously though, if people appreciate reading and get depressed in a Wal-Mart, they'll probably enjoy what I do. Funny, I think I just described the exact opposite of the average comedy-club patron."

Wink, Don't Tweet
Matt Bearden on what jokes you'll hear at Moontower and why he's not all a-Twitter