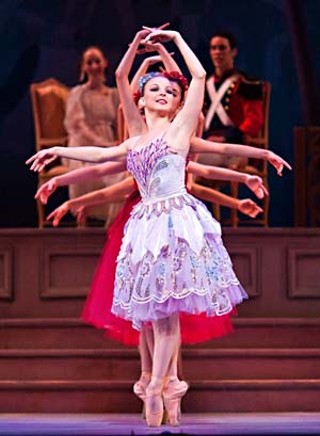 Dell Hall at the Long Center

We have now achieved the 46th annual production of Ballet Austin's The Nutcracker. It has turned into an institution, and you know how the Chronicle can get about institutions. Cue irreverence!

Before I give in to my cynicism, however, it's important to say what a lovely adventure of the imagination The Nutcracker really is. It's a tale with a little girl who is the hero, who gets to be a princess for one night. This production, choreographed by Stephen Mills, has some of the most beautiful, colorful costumes you'll see all year long. It's a wonderful time for families with little children, who can, along with their parents, buy into the fantastical wonder of this classic ballet.

Just don't go for the narrative logic. Here's why: Ballet has some quirky narrative conventions. They make sense in the context of dance, of course. Basically, any opportunity for a pas de deux between a man and woman or any chance for several young women to be onstage at the same time is exploited for as long as possible, beyond the realm of logic. If it's opera, the heroine will spend a whole aria dying. If it's ballet, then a single kiss lasts for half the act.

In the case of The Nutcracker, all this works to great comic effect, if you're willing to step back from years of Nutcracker history and expectations.

Let's go through the story, piece by piece. The children of the well-off Silberhaus family are psyched about having all their friends' families over for a Christmas party. Their godfather, Drosselmeyer (Anthony Casati), arrives, sporting a crazy eye patch. He scares all the kids, even though as performed, he's far more flamboyant than he is frightening. He puts on a magic puppet show and gives his goddaughter Clara (Macrina Butler) a nutcracker. Thanks, Daddy!

Later that night, she sneaks out of bed to cuddle up with the nutcracker (Michael Patterson), who then comes to life to save her from a bunch of household rodents. He doesn't put up a very good fight, though; turns out, she has to save him by stealing the awesomely costumed Rat King's (Edward Carr) sword and conking him on the head with it. Which raises the question: What good is a nutcracker prince anyway?

The Prince takes Clara home to meet the folks, who are at the moment dancing through the snowflakes. The Snow Queen (Allisyn Paino) and Snow King (Christopher Swaim) are so excited by the Prince's arrival that they clear out (I bet she wants grandkids) and let the Prince show Clara a good time. He puts on a variety show, and she is suitably impressed. During that variety show, one Austin celebrity per night dresses up in the phenomenal castle of a costume that is Mother Ginger, and I'm not spoiling that surprise.

Then the Prince calls Clara a cab. The King and Queen dance to pass the time until she can leave, and the Nutcracker Prince puts her to bed.

Clara wakes up. Poof! Just like Dallas, it was all a dream.

That was a cynical retelling of a magical tale of make-believe. With so many young children in the audience behaving so well, it's clear what a treat it is for families. In fact, every family should try to see The Nutcracker at least once if they can. Only make sure it's a good Nutcracker, one that will spark the imagination with its beauty and grace. This year's Ballet Austin production is one of those.