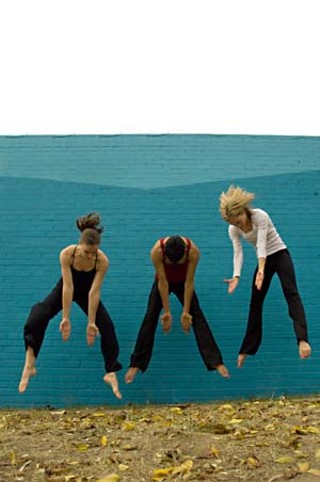 Finding a place to sit wasn't so easy at the final performance of Pushing Boundaries. Ballet East's fall production was such a big draw that extra chairs had to be brought in to seat everyone. Not that that's at all bad. Seeing a show in a packed house is always a more satisfying experience. You really feel yourself as part of this group organism we call the audience, your individual response melding with the responses of individuals around you, the sound of your hands clapping both feeding and getting lost in the collective applause.

And between the thunderous bursts of appreciation unleashed on Ballet East that day, images of individuals in groups kept resurfacing. It began with Gina Patterson's "Voice": Dancers were positioned around the stage in small clusters, usually with one dancer lying down, seeming to sleep, while another dancer sat beside her, gently stroking her. But at center stage, a dancer stood alone, periodically breaking into movements that were jerky to the point of spasmodic – a startling contrast to the serenity surrounding her. While that image gave way to other different ones, here was an arresting portrait of a figure alone and unsettled in a settled society: one who doesn't fit in, the outsider.

And being different can be dangerous, as Assistant Artistic Director Melissa Villarreal reminded us in "The Accused," the show's final dance. Inspired by the Salem witch trials, Villarreal's work presented a quartet of dancers in long red skirts who were rounded up and abused by the other dancers (wearing the same long skirts but in muted plums and greens). Mob scenes are never pretty, even when they are danced, and this was no exception. Graceful movements escalated into wrenching gestures, angry tosses, brutal jolts – actions made more disturbing by the soundtrack of slashing string instruments. While you couldn't call it subtle, the piece stands as one of Villarreal's most sustained and powerful choreographic statements.

Other dance makers took a more upbeat approach. Eric Midgley opened "Hang" with eight dancers in a circle, each leaning back on the knees and thighs of the dancer behind her to form a novel and captivating model of mutual support. The pose communicated the need for a common commitment from everyone for a group to "stand," and when the dancers broke the pose by easing slowly to the floor as one, it underscored the value of cooperation. You almost hated to see this unit dissolve into individuals, but the joy infused in the dance by Midgley and his performers more than compensated.

Sometimes the group was a gender, as in Toni Bravo's and Dixon Mena's playful considerations of womanhood, Bravo from an angle of romance, with women strutting their stuff and striking voguish poses to tango music and an Edith Piaf love song, and Mena from an angle of, well, partying, with each dancer appearing to be a party girl of a different era, from the Sixties Carnaby Street bird in mod skirt and cap to the Eighties Valley girl in pink tube top and flouncy tutu skirt.

Sometimes the group was only a couple, as in Ananda Mayi Moss' "Restless," where two dancers in front of an upended mattress created the illusion of us being over their bed. They tossed fitfully on the sheets before breaking into a dream ballet that literalized the push and pull between two lovers. In addition to some smooth partnering, Frankie Fuller and Jessica Gaby conveyed a convincing tension, the painful alternation of needing the other person and rejecting her.

Even Sharon Marroquin's "Garden," while a solo, seemed to speak to the individual-in-a-group theme I kept seeing. In it, a Chaplinesque/Keaton-ish Marroquin became infatuated with a small mound of dirt, and her deadpan delight in sinking her toes into the soil, touching it, watering it, and cultivating from it a flower communicated the place each of us has among earth's living things and what we can do to nurture life around us. Marroquin's movements – so simple, so precise – gave us the world and showed us how even as individuals we can make a difference in it. Seeing Ballet East founder and guiding light Rodolfo Mendez speak after this dance served to remind us of the difference this one company has made. It was a difference that packed house understood, and it roared its gratitude.