These busy abstracts create visual fields that are active, festive, and seductive 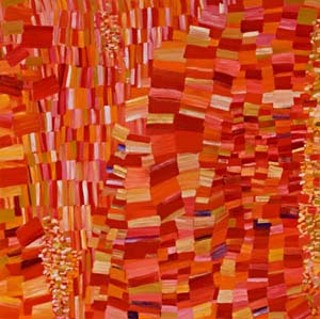 Picture a spectacular cannon-blast of confetti: The air comes alive with this dense cloud of shifting hues as thousands of tiny scraps of multicolored paper float and flutter, catching the light – a visual field that's active and festive and seductive, as well. That may be the best approximation I can offer of the feel of the new paintings by Sydney Yeager showing at D Berman Gallery. Canvas after canvas is tightly packed with bunches of small geometric figures that, while perfectly still, suggest motion – and not in the sensually curvy manner of the artist's previous work. The elongated swirls and loops of "Billow and Fold," Yeager's last show at D Berman, have been replaced by punchy little rectangles – sometimes skinny strips and sometimes chunky blocks – that abut and crowd and jostle one another like overheated atoms, that erupt in thick streams or fly in random, chaotic bursts. These are some busy little abstracts, charged with a different kind of kineticism than Yeager has evoked before. Using such small shapes as the base for the works, she's able to play around even more with color fields and layering, cramming more patches of complementary and contrasting shades into the canvas, packing in more places where shapes can meet and overlap, creating the illusion of greater depth in the image and of intense humming, vibrating activity.

Almost all the paintings share that sense of animation, and yet there's an intriguing degree of variety in the way it's expressed. The way Yeager plays with color here colors the mood of the motion in the various paintings. The dominance of black, white, and gray in Ordered Clarity, with its thick, curling clumps of cigarette-thin blocks, calls to mind the slow eddy of fog on a gloomy night. Under the Influence, on the other hand, with its voluptuous play of reds and roses, is the party girl of the exhibition, the one that arrives in a smart little crimson cocktail dress that no one can take his eyes off of; it's a work that dances. And next to it is a piece of sublime contrast, Local Innocence, whose soft spring greens and creams give off a calm, pastoral air, say, the gentle movement of a country breeze.

Admittedly, these descriptions take things a bit too far into the realm of the representational as far as interpretations go and may do a bit of a disservice to what are, after all, abstracts. It's just that Yeager's masterful manipulation of shapes and colors creates distinctively different kinds of energy in the various works. Perhaps it's best left said that there is an abundance in them to get your eye moving, and maybe that will spark some movement inside you, as well.