'You're a loose cannon, Cochise!' 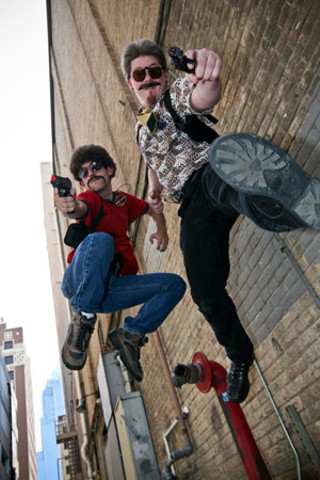 Takin' it to the streets: Matt Pollock & Marc Majcher in Cochise!

While Austin boasts so many improvisational comedy troupes you probably couldn't count them on 10 hands, it most likely can only boast one that was created because of an improvisation: Improv for Evil. "Most of us went through the Hideout school," says Marc Majcher (pronounced "may-chur"), one of IFE's founding members, "and after our graduation show, we went out to dinner with our instructor, Andy Crouch. Nadine Latief, who is Indonesian, and I were talking to him about how we were born in the same hospital in Buffalo, New York. And we had Andy going for a little while, and after a few minutes he realized we were lying, obviously, and he says, 'Oh God, you guys, you can't use improv for evil like that!'"

But they have used improv for evil just like that, to the tune of as many as six shows a month at venues all around Austin. Their latest comic wickedness is Cochise!, an entirely improvised, 70-minute takeoff on Seventies cop shows. Majcher informs me: "We got the idea from a Beastie Boys video. They do kind of a Seventies cop-show thing, and the fake TV show is called Sabotage, but the main character is called Cochise. We liked that. It was sort of a running joke in our troupe for a while. We were just like, 'Cochi-i-i-ise!' whenever someone would do something too wacky. And so we decided to make a show out of it."

But Majcher and his devilish cohorts didn't come up with all their Seventies schtick without a lot of work. "We practice different sorts of Seventies cop-show tropes. We watched a lot of the source material, a lot of Kojak, Starsky & Hutch, some Baretta, a little The Streets of San Francisco, a little Cannon, and analyzed how the shows were structured. Then we improvised scenes around that structure. Early on, we were trying to stick to a rigid structure, but we found that was too limiting. So when we practice, we establish characters and crime stuff and then just spin off that entirely."

And while you'll find more than a few improv comedy troupes out there who rest on their laurels by sticking with tried-and-true characters and routines, you'll find none of that with these evildoers. "We sort of discourage that as much as possible," comments Majcher. "One of the best things about improvisation is the ability to completely take yourself by surprise and just have stuff come out of your brain and your mouth that you didn't even know was there. So if you sort of stick to safe stuff, it might be funny, but it's not as exciting. We try to play as close to the edge of what we think is possible as possible."

For Cochise!, that means not having any kind of plan beyond asking the audience for a setting and letting a different member of the troupe play the title role in each performance. To add further spice to the mix, they'll have a guest artist join in every performance. "Every single thing is completely made up on the spot," says Majcher. "Everyone plays everything. The cops, the bad guys. It's 100 percent improvised. No byproducts. Anything at all could happen."