ALO's version, set in 1930s Hollywood, is the definition of audience-friendly 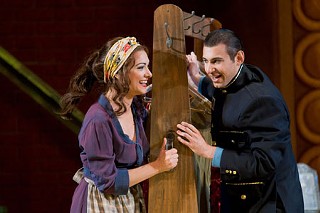 Dell Hall at the Long Center, through Nov. 16

The actual title of Gioachino Rossini's opera is La Cenerentola, but, of course, Austin Lyric Opera provides a translation on the program and supertitles of the libretto during the performance to make it audience-friendly.

"Audience-friendly" actually describes the entire approach that director Garnett Bruce and his creative team have taken to the whole production, which was initially created for the Lyric Opera of Kansas City in 2004. ALO has brought to Austin the sets, costumes, and Bruce himself to restage the show, and what a show it is. Set in 1930s Hollywood, the story concerns Don Ramiro, a film director seeking a new star. Believing women will only display their true natures if they do not know he is an auteur, Ramiro and his chauffeur, Dandini, switch identities, and when Ramiro comes upon a servant girl mopping up after her stepsisters and stepfather in the local vaudeville theatre – well, hey, you can guess where things go from there. And while Jacopo Ferretti, who wrote the libretto in 1817, may not have intended the story of the girl who rises from the ashes to become princess of a realm to have anything to do with Hollywood – well, hey, the whole thing's sung in Italian, so how many among us will know the difference?

ALO obviously recruits its principals from across the country, as the sold-out house was treated to New York's Michele Angelini lending his rich and powerful tenor to the role of Don Ramiro and Massachusetts' Sandra Piques Eddy thrilling in the title role. But the Lone Star State was not outdone, as Texas' John Boehr, playing the role of Dandini, stole every scene in which he appeared. While it was refreshing, even inspiring, to see the work of a director who understands how to stage against the strong parallel lines of a proscenium theatre, perhaps most impressive were R. Keith Brumley's sets and Mary Traylor's costumes. Brumley especially used the Dell Hall drop-and-fly system extensively and to magnificent effect. For instance, at the end of the first act, as the Cinderella story played out downstage, upstage a scene filming in a Western saloon transformed before our wondering eyes into a palatial staircase filled with showgirls in massive, peacock-feathered headdresses. Add to this James Sale's bold, constantly shifting, but always appropriate lights, and the resulting production values would be the envy of any Broadway professional house.

Despite the impressive technical and vocal qualities of the show, and despite Robert Tweeten's impeccable direction of the ALO orchestra, for me the real star was Dell Hall. As I listened to the first notes of music, I thought some tremendously expensive amplification equipment had to be in use, but at intermission, after as close an examination as my seats in the orchestra would allow, I concluded none was. The hall appears to be a massive resonance chamber, and my bet is the people in the farthest reaches of the balcony could hear as well as I could eight rows back from the stage. Granted, some of the actual acting in the production would not be acceptable in the most callow of community musicals, and at three hours, the show feels really, really long. But while I have seen bits and pieces of operas over the years, I had never seen one beginning to end, and I have difficulty imagining a much more effective introduction to the art form than ALO's production of La Cenerentola.