To my knowledge, Barbara Jordan never opened for the Dicks. In fact, I'd be mightily surprised if she ever attended a gig by the Austin punk legends. But in the coming month, the revered Texas congresswoman will be sharing the spotlight, so to speak, with the Eighties punk band, thanks to a Chicago-based art collective.

Temporary Services, as the group is called, was engaged by local contemporary art instigators Fluent~Collaborative to create a project for its exhibition space, testsite. For its first work in Texas, Temporary Services chose to "investigate two aspects of the state's cultural and political history that embody its radical independence: the development of Punk music in Austin during the early 1980s, and the speeches of Barbara Jordan." The unorthodox pairing reflects the varied interests and passions of the group's three members, says Marc Fischer, one-third of Temporary Services, along with Brett Bloom and Salem Collo-Julin. "We are always digging around the cultural and political margins – which is usually where we find ourselves situated – and if we respect someone's work, we sometimes try to get to know them so we can learn from each other." Research on the Dicks led the trio to Big Boys/Poison 13 guitarist Tim Kerr, who became a major focus of the project. And while the differences between some white male hardcore punkers and an African-American female member of the U.S. House of Representatives are pretty obvious, Fischer says, "The more time we've spent with the Dicks, Tim Kerr, and Barbara Jordan, the more parallels we find." Calling them "a great group of tenacious underdogs," he says: "These people took enormous personal risks to put their ideas out into the world. And they didn't stay comfortably put in local situations that could tolerate them. They took their ideas and work to a national level, where they would be met by far greater resistance and confrontation.

"Barbara Jordan also said: 'Let each person do his or her part. If one citizen is unwilling to participate, all of us are going to suffer. For the American idea, though it is shared by all of us, is realized in each one of us.' Likewise, Tim Kerr would constantly ask audiences, 'What are you doing to participate?' These are, or were, not passive people! Their messages feel very current to us. We were not at all surprised to learn that Tim Kerr had been planning to make some drawings and paintings of Jordan. He gave us one portrait of her to use in his interview booklet."

The form the Temporary Services project will take might not be what you first think of as art. But the group's interest in public spaces, especially as they're shaped by government and commerce, leads it to document efforts by others to do that as well as doing it itself. One arm of Temporary Services publishes booklets featuring extended interviews with artists (Temporary Conversations), and the Austin project will result in two new booklets: an extended interview with Tim Kerr and a history of the Dicks, to be released at Domy Books on Saturday, Nov. 15.

The group has also made banners out of discarded plastic bags that feature quotes from punk song lyrics and Jordan's speeches, and these will be shown in the testsite space.

Barbara Jordan onstage with the Dicks? She might not have joined them in singing, "It's not for the hell of it/It's to tear this fuckin' nation down," but as Marc Fischer notes, "I think Gary Floyd and company could probably agree with Jordan when she said, 'I never intended to become a run-of-the-mill person.'"

A release party for Temporary Services' booklets on the Dicks and Tim Kerr, as well as its new book, Public Phenomena, will be held Saturday, Nov. 15, 7-9pm, at Domy Books, 913 E. Cesar Chavez. For more information, visit www.domystore.com.

Art Work
Why don't we think being an artist is a 'real job'? 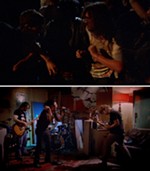 Matt Stokes: These Are the Days
Start your own damn band