Improvisation on Four Legs and a Seat 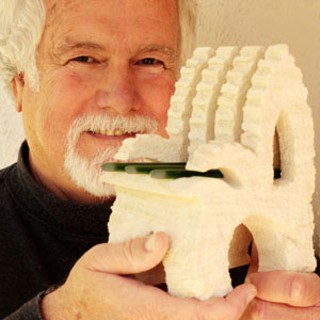 Imagine a group of jazz musicians improvising – really fine musicians, let's say, and nearly a hundred of them. One tosses out a gift, a theme for the rest to improvise on. One by one, the others respond, taking the original theme and making it their own.

But now imagine that this improvisation happens not in the immediate and ephemeral medium of music but in the slower, weightier realms of stone and glass, metal and plastic. Their unhurried, haunting composition is called the Texas Chair Project, and starting this weekend, you can see it at the Austin Museum of Art – Downtown. AMOA Executive Director Dana Friis-Hansen calls it a "call-and-response" – local sculptor Damian Priour introduced a theme, and 80 other Texas artists have improvised on that theme. Only instead of a musical theme, Priour has asked artists, in Friis-Hansen's words, "to revise and re-envision – even reinvent – the chair as we know it." 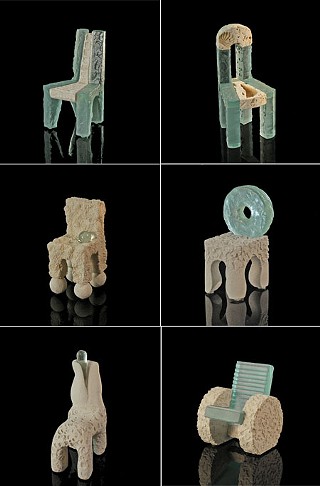 All chairs by Damian Priour

Once the idea struck him, Priour and his studio assistant, David Hesser, set to work making what Priour describes as "100 small chairs of stone and glass, each one different," a project that took six months. A striking collection, Priour's original hundred chairs explore a myriad of seating possibilities in limestone and glass. One of these original chairs is shaped like a woman's torso; on another foursquare stone chair sits a translucent green glass pod; on still another fat-limbed chair is perched two even tinier chairs, one stone, one glass.

In June 2007, all 100 of Priour's chairs were exhibited at the Austin Museum of Art as a group. After the exhibition, a few chairs were set aside as gifts for project donors. The rest were mailed to Texas artists or Texas-associated artists whom Priour admired. (Narrowing down this list "was the most difficult part," Priour says.) One of the best parts of this game is that the mailing was unannounced. A chosen artist would open an unexpected box to find one of Priour's chairs, along with a request to respond by making a new chair, in any medium the artist chose, and sending it back to Priour. The only "rule" was that the new chair must fit inside the 8-inch-square box that Priour's chair had come in.

The dissemination of the original chairs was a genuine gift, freely given, with no strings attached. Although Priour asked artists who did not want to participate to consider returning his chair so that it could be sent to someone else, it was not a demand, and not every chair was returned – and that's "part of the project, too," as Priour notes. But remarkably, 80 of the 88 artists contacted did send back a chair of their own making. AMOA had promised to do an exhibition if at least 50 were returned, and that exhibition – including 20 of Priour's original chairs which have been borrowed back from artists and donors for the occasion, as well as seven new chairs – opens this week Downtown. 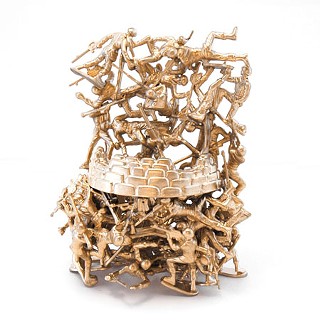 Yes, by the way: That's musician Bob Schneider, who is also an engraver and printmaker. He submitted what Priour described as "a print very typical of his intriguing dark-side drawings, titled Today you are alive. Tonight you're dead."

Priour, the creative spark behind it all, is the Texas Commission on the Arts' 2008 State Three-Dimensional Artist. Although he grew up on Padre Island, for the past 21 years he has lived on a 50-acre ranch on Hamilton Pool Road west of Austin, where he and his wife "raised three children and also raise fainting goats." In the studio near his hilltop home, he creates sculpture in limestone and glass, examples of which Austinites can see at the Blanton Museum of Art, the Austin Convention Center, and AMOA's Laguna Gloria home, where his AquaPoint fountain is permanently installed, among other sites. Priour also created the altar, pulpit, baptismal font, and a number of other pieces for Emmaus Catholic Church in Lakeway, and they are fine examples of his signature style: The altar is clean, earthy limestone enclosing watery green glass; in the center pillar supporting the altar, a cross is sunk into the glass, appearing underwater, present but untouchable. But Priour's work can also be seen far beyond Austin, in other cities, in private collections, and in major corporate buildings around the country.

He has always been interested in chairs, and in his statement for the Chair Project, he suggests, "It's likely that my interest in chairs originated – like most everyone else's whether they know it or not – from mother's lap." But he has taken that interest a good bit further from the lap than most of us do. "I made my first full-sized chair in 1972 out of copper pipe," he explains. "Then I purchased a chair sculpture by New York artist Alan Siegel about 10 years later." He and his wife began collecting unusual chairs, "and our collection grew huge over the years. We now have about 200 chairs, large and small, in our collection, and I would say that with this collection by these incredible Texas artists, it is arguably the finest small chair collection in the world."

But when it comes to the Texas Chair Project, Priour insists that "it's really not about me but about the artists who have participated," and he expresses great pleasure at the number of artists who responded to his call and were willing to, as Friis-Hansen puts it, "step outside their routines, to replace their own artistic goals and aspirations with a set of standards provided by another artist." Discussing the scores of chairs he received, Priour has nothing but praise. He calls David Hesser's Attack Chair "a beautifully dangerous piece. It is an actual weapon, and the four legs are made of stainless steel blades sharpened to perfection. Probably the best thing he's ever done. I've sliced myself three times just unpacking and repacking it." Priour also praises Jesús Moroles, one of the best-known artists in the group, who provided, in his signature granite, an austere, delicately colored "O" faced with a stone, semicircle seat. Kate Breakey sent in one of her hand-painted photographs – in this case, the elongated shadow of a chair on a desert landscape, with an attenuated shadow that may be the photographer nearby. (The Breakey piece is 32 inches by 32 inches – she folded it to fit inside the box, as did Schneider with his print.)

Other artists stepped further away from their usual media or themes. Priour points to Fidencio Durán, the painter and muralist whose work can be seen at Austin-Bergstrom International Airport and elsewhere around town. But in this case, Durán "created a chair from foam core and attached to it his signature drawings," Priour explains. Melissa Miller, another of the better-known artists here, "made Crow Chair, looking as though it just flew out of one of her paintings. It's painted aluminum," Priour says. (Animals are Miller's preferred subject.) Priour also points out that Jimmy Jalapeeno, "known for his highly evolved paintings, stretched his creative muscle and made a chair out of wood" and that painter Joe Jansen "created his chair and ottoman from beautiful rusted wire."

In fact, the range of materials used for these chairs is remarkable. Friis-Han-sen lists "books, a beer can, bronze, buttons, cement, ceramic, fabrics, felt, found objects, granite, knives, lead, money, neon, paper, plastic bags, resin, sawdust, toy soldiers, twigs, and video" for a start. He adds that "other artists found inventive ways to fit a larger object into that small box by breaking, folding, or grinding up the original into sawdust."

The artists have done a superb job of reimagining the unremarkable object we expect to keep our backsides well off the ground. Friis-Hansen observes that some of the pieces stretch the formal structure of a chair, "the basic concept of four legs, a back, and arms, in all directions," while other pieces "morph from a chair into a cat, the moon and the sun, or an orchid, all while still remaining seating." Some of the works have a warm emotional tone, such as Michael Reese's The Orchid Chair, which Priour says is "based on the flower and dedicated to his wife, Pamela. [Reese] is a designer by profession and made it from metallic flip-flop paint over a nylon plastic." But some of the chairs are dangerous, such as the aforementioned Attack Chair or Eric McGehearty's Sitting Pretty, a red steel school desk with a spike thrusting diagonally from the seat.

This is not the first collaborative project that Priour has initiated. "My public art installation Waller Creek Shelves was a collaborative piece," he recalls, "with homeless persons who helped me gather 'found objects' from along Waller Creek to use in the sculptures." The piece, which now hangs in the Austin Convention Center rotunda, features glass and limestone shelves which support blown-glass containers. Inside the containers are found-object sculptures made from objects collected by Priour's homeless assistants. "The homeless were paid for their efforts," Priour says, "and when they told me they were so proud to be involved in something like this for the city, it made me feel great."

Once "The Texas Chair Project" exhibition closes in February, Priour will take the chairs back to his home. And yet the project will not end there. Priour has plans for the Global Chair Project: "A worldwide call will be sent out asking artists to make a chair suitable for collecting and restricted to a size that will fit into an 8-inch-by-8-inch-by-8-inch box." Photographs of the chairs they make will be posted on a website, and a chair will be auctioned off daily, with proceeds going to a foundation benefiting the arts and the environment. That would be a fitting continuation of a project that Friis-Hansen says "transcends the specifics of each chair and becomes a manifesto for community creativity."

Priour made a gift of art, and 80 Texas artists responded with a new gift, one we can all share at AMOA this winter. Come hear a slow, dreamy improvisation in stone and wood and steel and paint from some of Texas' finest artists.

"The Texas Chair Project" is on display Nov. 15-Feb. 8 at the Austin Museum of Art – Downtown, 823 Congress. Meet the artists of the project on Saturday, Nov. 15, 1pm, at AMOA – Downtown. For more information, call 495-9224 or visit www.amoa.org or www.thechairproject.net. 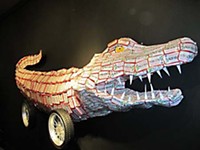