Get Your Art On

A spotlight on Austin's embarrassment of riches

Have you gotten your art on?

Last week the Austin Circle of Theaters, along with the city's Cultural Arts Division, launched an 18-day campaign to build awareness of the embarrassment of riches that our city enjoys where the arts are concerned, and that's the question at its heart. Unlike some similar efforts, which are built around events developed specifically for the campaign, ACoT's Get Your Art On simply – and smartly – shines a spotlight on the numerous cultural activities usually going on this time of year: the Austin Film Festival, the Texas Book Festival, Free Night of Theater, the Austin Powwow & American Indian Heritage Festival, the Hispanic Heritage Month chamber-music concert, the Día de los Muertos procession, and Austin Museum of Art's La Dolce Vita, not to mention the dozens of theatrical productions, film screenings, dance and classical music concerts, visual-arts exhibitions, literary events, and comedy shows crowding the calendar in October. They're all included as Get Your Art On events, the message being: There's all this remarkable stuff going on around town, and you should be a part of it. Now, that's the same message that media outlets like this one try to deliver every week, but I admit that sometimes it gets lost in the buzz of everything that's going on, and a new voice is needed to cut through the noise so it can really be heard.

The mascot for the campaign is that old Austin stalwart the armadillo, who stars on a series of postcards where the critter appears with some prop associated with a specific discipline (tutu for dance, guitar for music, paintbrushes for art, etc.), accompanied by a trivia question tying together that discipline and 'dillo – a lighthearted approach that gives a nice nod to the artists of Austin past. The 'dillo also adorns ads, posters, and coffee sleeves that direct your attention to ACoT's Now Playing Austin website, where you can find information about all the Get Your Art On activities. The driving force behind the campaign is, interestingly enough, a newcomer to Austin: ACoT staffer Jessica Thompson, who spearheaded a similar campaign in her old hometown of Madison, Wis.

The launch took place at City Hall, where Council Member Laura Morrison paid tribute to Austin's "vibrant arts community" and told the assembled how fortunate she was to "get to work in a building filled with art." It's always nice to hear a politician throw some support to the arts, but my favorite thing about Get Your Art On is its inclusiveness. Like the recent cultural planning effort CreateAustin, which this campaign grew out of, it doesn't divide by discipline or distinguish between the nonprofit and commercial arts; it sees the different art forms as part of the same treasure trove of creativity. And taken that way, you really get a sense of what makes Austin a capital of the creative class. So get a sense of that big picture, culturally speaking, and while you're at it, get your art on. For more information, visit www.nowplayingaustin.com.

READ MORE
More Get Your Art On 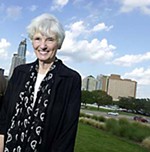