'Night of the Living Dead'

I (heart) the dead 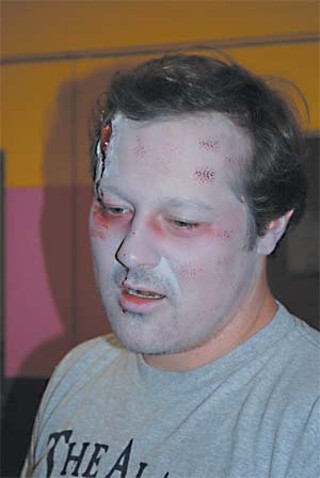 "My opinion of a good zombie walk is to loll your head as if it's a little too heavy and the muscles have begun to atrophy." – George Romero

John Carroll, artistic director of Weird City Theatre, was 10 years old when he fell in love ... with Night of the Living Dead. "It had such an effect on me. Sneaking downstairs when my parents were asleep, watching something I knew I was forbidden to see. It's an intense movie. It absolutely grabs you by the balls and does not let go." George Romero's 1968 film, Night of the Living Dead, gave us the modern zombie archetype: the shuffling, pale, flesh-thirsty armies that swarm the world as it comes to an end. Romero went on to create four more Dead films, perfecting the zombie genre and honing the subversive social commentary that went with it. (Romero is currently in production on a new film, Island of the Dead, featuring underwater zombies.) Carroll describes Romero as one of his idols and has adapted the beloved movie for the stage in a production now running at Hyde Park Theatre. "I want audiences to feel the same way about this movie that I did when I first saw it."

Humans have an insatiable desire for fear. Horror films, haunted houses, campfire ghost stories, UFOs, end-times. Carroll believes fear is something that people are drawn to on a nearly subconscious level. "There's always this thing in old-fashioned funerals. You see the person lying there. Somewhere in your subconscious, there's this little question: 'Are they going to get up?'" The part of fear which intrigues Carroll is the same part that seemed to intrigue Romero: the chaotic, apocalyptic nature of disaster. "There's something fascinating in just starting over and flushing it all down the toilet and seeing what happens next." It is through this apocalyptic lens on Night of the Living Dead that Carroll has encouraged his actors to connect with the material and to understand its relevance. "Nobody can relate to a zombie outbreak, but we can relate to the hurricanes we've lived through. I was in New York during September 11 in 2001. We all have these personal things, survival-type things, that we've lived through and can connect to as actors and directors."

Weird City Theatre hopes to honor the original material while making it work for the stage. They believe Hyde Park's intimate space will help reinforce the story's sense of claustrophobia. Carroll's adaptation hews closely to the original story but has been embellished with nods to Romero's other films. In a scary play, just as in a haunted house, individual people will react very differently to the provocation of fear. Some will scream. Some will giggle. Carroll recognizes that reactions will vary and that everyone's experience will be his or her own, but he has instructed his actors to play it dead serious. "If I don't make someone cry or wet themselves a little bit, I won't feel I've done my job." 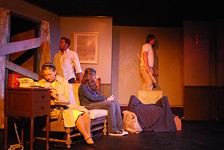 Night of the Living Dead
Is this stage adaptation playing George Romero's zombies straight or for camp?