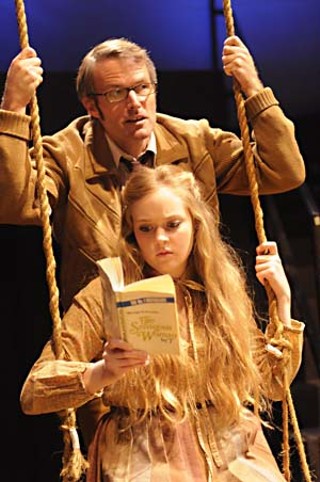 What makes a man a man? Or a woman a woman or a servant a servant or anyone anything? The roles we take on in life, the rules we abide by, we are as much their creators as their followers. In Mary Moody Northen Theatre's production of Cloud 9, the first under new Artistic Director David Long, the search for self-fulfillment comes into direct conflict with the roles society dictates for us.

Yes, Cloud 9 is a mixed-up, muddled-up, shook-up world where boys will be girls (a man plays wife Betty) and girls will be boys (a woman plays son Edward), an African servant is played by a white man, and the 25 years that pass for the characters are more like a century in historical terms. Playwright Caryl Churchill was looking to color outside the lines from the get-go.

Like Death and the King's Horseman, staged at the MMNT earlier this year, Cloud 9 deals with colonial Africa, and some of the same stock characters appear in both plays (the cocksure commander, the converted servant). But the subject matter and tone veer in sharply different directions. Cloud 9 satirizes the colonizing mindset of the British Empire, as well as its oppressive social structure.

Tracking the characters' desires is like following a soap opera: The governess is in love with the lady of the house, who is in love with the visiting explorer, who says he's in love with her but is screwing her son, who loves him but can't show it because he must look manly in front of his father, who's having an affair with another woman.

Everyone's a secret sinner in this colonial Africa setting, hindered by hidden yearnings but unable to act on them because of their places in society (save dominant white male Clive). Much of this is played for laughs, with many knee-slapping, absurd moments, but the knowledge that these characters are stuck in unhappy marriages or full of unrequited love dampens that satirical swagger.

You say you want a revolution? In Act II, set in 1979 but with the characters having aged only 25 years, they get the liberation they yearn for, only freedom doesn't bring them happiness. Instead of being defined by their social roles, they're defined by their desires. Everything's out in the open, such as the single mother who explicitly asks her female friend for sex. But giving into their desires leads them no closer to fulfillment, only naughty, gratuitous sex.

If this seems to paint a meager picture, well, Churchill wants to challenge her society's concepts of gender, power, oppression, and desire. Director David Long does not get lost in the conceptual challenges of the script, though: His Cloud 9 is entertaining, quite funny, impeccably acted, and full of beautiful moments. As in Long's staging of Full Circle at the MMNT last year, Cloud 9 has a strong ensemble element that is brought out wonderfully when paired with Michael McKelvey's compositions.

You can't choose your family. But how long you let your background and society determine who you are is, Churchill implies, ultimately up to you. As an old, independent-for-the-first-time Betty theorizes, it's a question of who to love and who to live with. Answers may be hard to come by, but there aren't many more elegant, entertaining ways to question your perspectives than Mary Moody Northern Theatre's Cloud 9.