At the opening of this Austin Playhouse show, some actors hadn't done the work 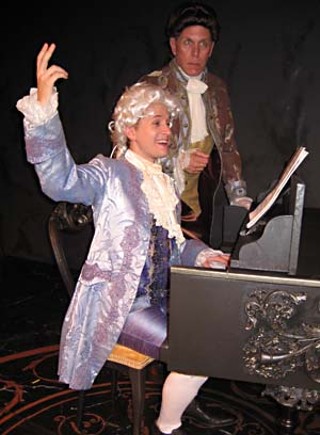 So much of theatre is simply about doing the work. In the case of acting, that can be concisely defined as memorizing your lines, opening your mouth, and saying those lines. I can't tell you how many times I've heard an audience member say, "I don't know how you memorized all those lines."

Well, that's it, in an easy little nutshell – that's the work.

On opening night of the Austin Playhouse Equity production of Amadeus, it appeared that some, if not most, of the actors did not do the work. Granted, it was opening night, but these are professionals! If anyone should know their lines, it should be professional actors! It's difficult to say exactly who didn't know the lines, because the person who looks bad almost always isn't the one who is messing up. Suffice it to say that someone – probably more than one someone – didn't know the lines well at all, and the mess it caused happened often enough that it was noticeable and, thus, distracting and irritating. And while I'm sorely tempted to elucidate how this overall lack of knowledge concerning the lines affected the tempo of this nearly three-hour production, I don't want to bore you with it.

Another challenge facing actors is deciding exactly what to do while onstage. An actor can't simply open his mouth and say the lines, can he? Well, actually, most of the time, he can do exactly that. Unfortunately, many actors seem to believe that "doing something" means "I have to do something to make this interesting." So they put on a character. They speak in actor-y voices or they do actor-y things, so everything they do looks fake and, well, actor-y. But so often an actor doesn't really need to do much of anything. Often, the character is wholly contained in the lines the playwright has written, and what the actor needs to do is get out of his own way: just open his mouth and say his well-written lines loudly and clearly, without undue embellishment.

Some of you may read all this and say: "Well, that was a waste! He didn't really review the production!" But I did! So, in case you missed it: What I saw was a theatre chock-full of professional actors, many who didn't know their lines well enough, and some who didn't know their lines well at all, putting on characters I had great difficulty believing in. There were exceptions, most notably Rick Roemer, who is sometimes brilliant in the role of Antonio Salieri, the successful composer who envies the genius of Wolfgang Amadeus Mozart, and Brian Coughlin, who consistently got out of his own way. But the exceptions didn't really make that much of a difference over three hours' worth of time. Your experience, of course, may be entirely different; after all, now they've got five more weeks to work on it.