Austin artists Faith Gay and Ben Aqua have been chosen for residencies at Centraltrak, a new facility for Texas artists and grad students at the University of Texas at Dallas, located in the Deep Ellum neighborhood of downtown Dallas. Centraltrak's director, Dr. Charissa Terranova, selected the two to live and create new artwork in the venue, which contains four live/work loft spaces for artists, eight studios for UT-Dallas graduate students, and a gallery. Aqua will stay there for one week in late November into early December, preparing music, set decor, and costumes with his collaborator, fellow Austin artist Dylan Reece, for a one-night performance. (Lately, Aqua has been presenting synthy, colorful performances under various monikers such as Assacre, MVSCLZ, and Totally Wreck.) Gay will stay for a month, creating new work in May 2009. This work visit is timed to coincide with her solo show at Pan American Art Projects. In the meantime, however, some of Gay's current work will be exhibited in "Ludic Space" with current Centraltrak artist Ruben Nieto starting this week (Sept. 20-Nov. 17). Gay is pleased to be working with Terranova, saying: "She's a rocket and superenergetic about getting the program off the ground! I'm pretty excited about the whole darn thing." Centraltrak has an ambitious schedule of events for the fall. For more information, visit www.utdallas.edu/centraltrak. Studio Visits: William Heath (aka Billy Beasty)
In an Eastside home, a consummate collaborator lives with the detritus of spectacular gestures 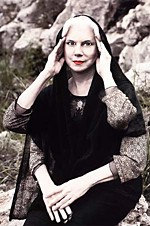