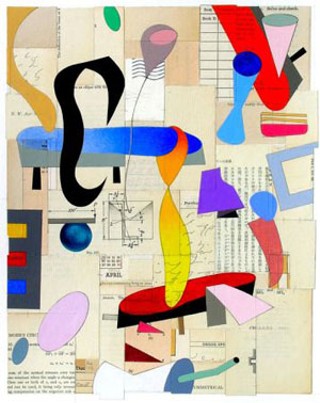 Some people don't like abstract art, or most abstract art, because it doesn't seem like a whole lot of thought or work went into it, or, worse, it often doesn't even look that good.

Which is why we're especially pleased by this "Maximal/Minimal" show of Helmut Barnett's at Wally Workman Gallery: A lot of thought went into it, a lot of work went into it, and it looks great.

Here are colorful abstractions – sharply defined and precisely rendered colorful abstractions – arranged to achieve uncommon balance or to affect a sort of kinesis via static articulation all stacked and staggered, the bright shapes often against a ground of collaged diagrams and texts. Imagine: The baby Jesus had a hissy fit while playing with Colorforms in an antique-book binder's studio, but (baby J being the divine infant, after all) the results were heavenly and wholly coherent. There are several of these, and they're only part of the show.

Elsewhere, in a series of paintings of "Caryatids," the main forms are silhouetted like overlapping, vertical sine waves stark black against backgrounds formed of industrial color swatches: Red Caryatid, Yellow Caryatid, and – bright polychrome in the middle – Carnival Caryatid. On the wall to the left of these, there's a different pair called Garden Scape I and Garden Scape II; they're intricate microcosms of acrylic on paper, a gathering of objects composing the sort of beauty that George Herriman might have created with a fierce and steady brush in the midst of an Ecstasy bender. (Really good abstract art, our thesis insists, requires such metaphors as these.) A viewer can sense, in some of these works, faint echoes of de Chirico or Miró, but always the force that drives these flowerings is clearly Barnett's own. That's the "Maximal" part of the exhibition, and it's a doozy.

"Doozy" comes from Duesenberg, of course: the American-made automobile of the 1910s-1930s that was the epitome of luxury and grace. We mention it because the "Minimal" section of Barnett's show features large paintings of what the artist calls "the couple," a simple glyph like the corporate logo for Togetherness or perhaps sexual union as streamlined for immense inscription on the Nazca Plain. First it's rendered black on white, then white on black, acrylic on paper at 43 inches by 30 inches, and it's an excellent icon well presented. Why Duesenberg, though, is because the image would make, in three dimensions, a fine hood ornament for a car as elegant as a Duesenberg. As if precognitively acknowledging this idea, Barnett's created a paper stone maquette of the thing, 3D Couple, that commands attention from one lucky corner of the Workman Gallery's second exhibition room; except that, given the size of this particular "hood ornament," the corresponding doozy would have to be big enough for Paul Bunyan to drive. Even the minimal here is, in a way, maximal.

The entire show affords maxi-mum enjoyment for your eyes, an intricacy of balances and references for your mind to happily puzzle upon.