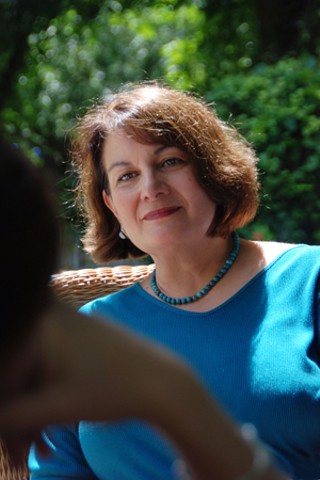 Lady Macbeth has a Palm Pilot, and Austin Shakespeare is on Facebook. Those are signs that, since becoming the company's artistic director, Ann Ciccolella has been leveraging a broad spectrum of tools, from the Internet to old friends, to help get Austin Shakespeare back on solid ground.

A production of Macbeth might not seem to be the most encouraging sign for a company that, just a year ago, saw questions raised about its viability. After all, theatrical tradition suggests that failing theatre companies often produce the infamously unlucky tragedy in a last-ditch effort to save themselves. But the new version that Ciccolella is directing for Austin Shakespeare is no last gasp. Instead, after a year of furious effort by the director, it is nothing short of a red-carpet hello. The company's first production at the Long Center ushers in a period of dynamic growth and palpable excitement for Austin Shakespeare.

In the summer of 2007, the picture was very different. At the end of Guy Roberts' five-season run as artistic director, Austin Shakespeare was in trouble. The 23-year-old company, best known for its annual free productions of Shakespeare in Zilker Park, was facing substantial problems, both financial and artistic. As Alex Alford, Austin Shakespeare's new managing director, describes it: "The financial picture was not good. There was a substantial amount of debt and a certain loss of credibility in the company's ability to thrive and grow." In addition, due to canceled productions and an inability to pay for productions that had occurred, the company had damaged relationships with its artists. Austin Shakespeare needed an artistic director that was left- and right-brained.

As it happened, Ciccolella had recently decided, after eight successful years, to leave her position as managing director of Zach Theatre. She thought she'd get a regular job and do classical theatre on the side. ("Not necessarily Shakespeare, because we already had a Shakespeare company," she notes. "I didn't want to confuse things.") But the fact that she happened to be available just as Austin Shakespeare was seeking a new leader was one of those freak and sublime coincidences. Robert Matney, a member of the board and the actor playing Banquo in the upcoming production of Macbeth, describes the match: "Her strengths lined up precisely with what was needed. Almost mathematically. There was serendipity afoot." 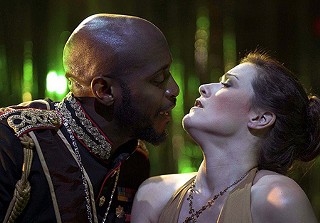 The move to Austin Shakespeare was an unexpected and perfect alignment of Ciccolella's skills and her passions. "A blend of running the company and being certain everything gets done right, but being able to make the rehearsal part of your life," she says. Asked if she had thought to take a break after Zach, she replies: "This is a break. I can play in the playground." Ciccolella was thrilled with the opportunities and undaunted by the challenges. "It's not that ailing to have a deficit. I knew the value of the product. Meaning people respected the company in terms of artistic value. That I would begin to erase debt or deal with debt was something that I was comfortable doing."

So the work began. Ciccolella and the board mutually agreed that the top priority was to pay actors from recent seasons, and they accomplished that goal. Through a series of meet and greets, Ciccolella set about repairing relationships with the community and reaching out to build new relationships. According to Alford, "Ann was able to restore confidence in the board and donor base, who have resumed their support of the company." Education is one of Ciccolella's passions, and she introduced new programs to help spread the Bard's word: Shakespeare Aloud, a Shakespeare reading group that meets every Sunday; Shakespeare Studio, a training regime for Austin actors that Ciccolella hopes will eventually develop a style specific to the company; issue-based forums such as Shakespeare, Politics, and Texas, which featured actors and politicians discussing contemporary topics through the lens of the Bard's plays. Ciccolella produced the musical revue Words by Shakespeare, Music by Austin at the Curtain, a scaled-down replica of the Globe Theatre on Richard Garriott's estate (note: Arts Editor Robert Faires was part of that production), and directed Much Ado About Nothing for the company's annual free production in Zilker Park this year. This fall's production of Macbeth at the Long Center represents an effort to make the Rollins Studio Theatre a partial home base for the company, with plans for four productions there over the next two years. And on the administrative side, Alford was hired on as the company's first managing director, a major step toward stabilizing Austin Shakespeare's infrastructure. Of the addition, Ciccolella says: "I am so grateful to have another person, full time, a partner. He's brought huge value to the company already." All of which adds up to a big year for Austin Shakespeare. Alford says: "It seems impossible that Ann did the job alone. I consider what she did in the last year to be heroic." Robert Matney adds to the amazement: "She is a tireless worker. She just doesn't stop. She's quadrupled programming; she's halved debt; she's doubled staff. There is a connectivity that is really rich. Her first year has been remarkable."

So Ann Ciccolella is a supremely competent leader for Austin Shakespeare, but perhaps what makes her most suited to the work is her passion for the words. "I think Shakespeare is the greatest writer in literature. And if theatre gets him, that's pretty exciting!" Matney notes: "Despite her very strong personality, Ann is able to sublimate herself to the mission of the organization. It's all about Shakespeare." Passion is contagious, and Austin Shakespeare is surrounded these days by enthusiastic allies. A main one is Cliff Redd, executive director of the Long Center, who, before he moved to Austin, ran the Shakespeare Festival of Dallas for many years. He is thrilled to have Austin Shakespeare working in the Rollins, which he describes as an ideal space. "The thing you look for when you're presenting or producing or directing Shakespeare is a space that allows you a lot of choices, so you can have the entire palette of human creativity." Both Ciccolella and Redd express a strong desire to introduce Austin Shakespeare to a wider audience. They subscribe to the idea that more Shakespeare equals a more thoughtful world. It's just a matter of getting it to the people. Redd hopes the "rocket fuel" of the Long Center can help accomplish that mission.

The cast of Macbeth is a great window into the company's new energy. A rehearsal of the work, even at the early stages, promised great chemistry between the two leads: Marc Pouhé, a performer who has a long history with Austin Shakespeare, and Sharron Bower, a visiting artist who's also a returning artist. Seventeen years ago, while earning her Master of Fine Arts at the University of Texas, Bower played Rosalind in Austin Shakespeare's As You Like It. Matney, who has logged several years with the company, is excited that the cast includes many people he had never met before this production. That is no accident. Ciccolella is focused on keeping the company open and inviting: "I want to be very porous about new people coming to town."

Redd uses the phrase "delicious collisions" to describe the chance encounter of, say, a symphony-goer and an edgy-theatre-goer who both happen to have come to the Long Center on the same night for two wildly different pieces of programming. "Delicious collisions" is an excellent way to describe the excitement surrounding Austin Shakespeare. The collision of Ann Ciccolella with the 24-year-old company, bringing new stability and growth. The collision of alumni actors returning to Austin and new actors just arriving. The collision of the Zilker Hillside audience with the Long Center crowd. The collision of old words and modern technology. And as any lover of Shakespeare will tell you, it is no surprise that the words of Lady M make sense whether she is holding a Palm Pilot or parchment. Shakespeare is always relevant. Ciccolella is hoping to make it relevant to many more people in the years to come. In a testament to her generosity of spirit, these ideas of expansion are not just for the benefit of Austin Shakespeare but for the larger theatre community. "We all know there's nothing like live theatre. We all know there's nothing like hearing Shakespeare's words come to life," she says. "But that is news to a lot of people. When we encourage people who wouldn't normally come to taste it, try it, that serves every theatre in town."

Cliff Redd has some closing thoughts on the difficulty of balancing the creation of art with the logistics of drumming up an audience and maintaining an organization: "The lights coming on are miracles every time. They are representative of an epic, heroic human effort. It's not by accident. It's not by anything but hard work." Hard work is what it takes, and hard work is what Ciccolella has given and will continue to give to Austin Shakespeare.