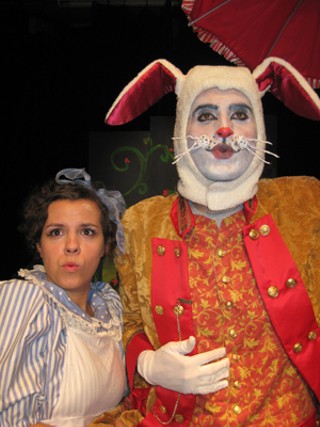 There is a dark-haired Alice with a cartoonish English accent playing straight man to Wonderland at the City Theatre. Her perspective is ours. She is thrust into a world where everyone is mad, and, like we might, she continues to seek logic in the nonsense.

Wonderland infuriates Alice, but at the same time, she is falling madly in love.

The strength of City Theatre's production of Alice in Wonderland is the individual characters. As each one pops on stage, it feels like an aspect of Lewis Carroll's imagination has come to life. The play follows the episodic structure of the books. Alice moves through the world, encountering ever madder crews. The ensemble of actors has made clear and often hilarious choices, from physical life to wacky voices. The costumes, designed and gathered by Jessi Brill, embellish the cohesive and larger-than-life world. The make-up, conceived by Fiona Rene, is intricate and gorgeous. Stacey Glazer and Andy Berkovsky work together to stage and direct this original adaptation complete with song. The musical numbers are a combination of original lyrics by Berkovsky and music from well-known composers such as Cole Porter and Irving Berlin.

The cast is strong across the board. Everyone seems to delight in the world of the play. Casey McAuliffe's 100-watt grin is perfectly suited to her sensual and laid-back Cheshire Puss. Other standouts are Liz Roark's Tweedledee, Rene's Caterpillar, and Nathan Brockett's Mad Hatter. When the entire ensemble of 23 actors comes together for a trial under orders from the Queen of Hearts, it is a buffet of quirks. Unfortunately, the singing is not as strong as the acting. The show does not get the lift it wants from the songs, which are mostly underwhelming. Alice in Wonderland runs into trouble when it descends from delectable chaos to shrieking chaos. There are too many moments when no single actor can be heard over the collective noise. The character of Alice also gets lost over the course of the play. At the beginning, actor Nicole Sykes wears Alice well. Her precociousness and curiosity set the play on a fun path. However, as she is tossed from scene to scene, Sykes falls into the trap of straight-man mugging. Rolling eyes and pouting take the place of wondering in Wonderland.

City Theatre's production is a reminder of how totally dark Wonderland can get. The scene where the Cook and the Duchess are smacking a pig wrapped in a baby blanket is like something from The Shining. The Mock Turtle's existential ponderings and puns float far above the heads of a younger crowd. But that dichotomy of darkness and light makes for high-quality family theatre. The night I saw the show, two young girls in the front row were delighted with the twists and turns of the visual feast before them. Meanwhile, the adults were able to enjoy the satirical journey.

This Alice in Wonderland is a straight-up and well-executed adaptation of Lewis Carroll's book. The wild happenings have been staged with simple acts of theatrical imagination. As the story ends, the narrator tells Alice it is time to go. All the characters turn their backs to her, and she looks very sorry to leave them. A ballad is sung to her departure. It is a lovely way to stage the waking-up-from-a-dream device. City Theatre's production leaves the audience in that bittersweet moment after a good dream and before full consciousness.