There's no stopping the indefatigable Ms. Stritch, and why would you want to? 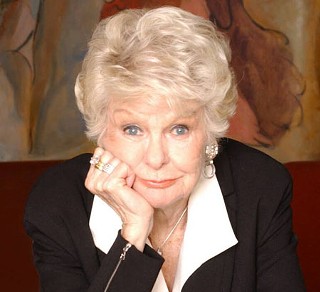 If any entertainer has earned the right to a little R&R, it's Elaine Stritch. Fifty-plus years on the boards that included understudying Ethel Merman in Call Me Madam and taking over her part on the national tour, starring in Noël Coward's Sail Away (written for her), replacing her former acting teacher Uta Hagen on Broadway in Who's Afraid of Virginia Woolf?, and creating the definitive characterization of Joanne in George Furth and Stephen Sondheim's Company. And that's just in the States. During a decade in London (the time when she was married to the late John Bay), she starred in West End productions of Neil Simon's The Gingerbread Lady and Tennessee Williams' Small Craft Warnings and put in four seasons on the Brit-com Two's Company with Sir Donald Sinden. And though she seemingly hit a valedictory peak with her one-woman show, Elaine Stritch at Liberty, which earned her a Tony Award and an Emmy (for the D.A. Pennebaker-Chris Hegedus documentary film about the show), seven years after its initial run, she's still wildly busy: hectoring Alec Baldwin as his mom on 30 Rock (which won her one Emmy already), squatting in an ash can in a production of Samuel Beckett's Endgame at the Brooklyn Academy of Music, spoofing herself on The Big Gay Sketch Show, and continuing to perform Elaine Stritch at Liberty at the Cafe Carlyle (in the New York hotel where she lives), in London, and, as of this week, in Austin. There's no stopping her. And really, with a performer this gifted and with this much life in her, why would you want to? Prior to Stritch's four-night run at the Mansion on Judges' Hill, the Chronicle gave her a midnight call – Stritch's preferred time for interviews – and spoke with her about connections, hard work, and change.

Austin Chronicle: When you're onstage, what connection do you try to make to an audience?

ES: As Mama Rose says, "You've either got it, or you've had it." You just have it, or you don't. I'm not talking so much about talent. I make a connection with an audience just like I'm good at making connections with people. I went out to dinner the other night with two total strangers, and I had the best time I'd had in years. That either happens, or it doesn't. But in the theatre, it's gotta happen. You just can't take any chances. You've got to be secure in the material that you're doing, and you perform it, and it works, or it doesn't work. And my show works. It really does.

AC: It sounds like you worked very hard to make sure that your show works.

ES: Thank you very much for that, because I did. But I didn't realize it at the time, do you know what I mean? I wasn't aware that, oh boy, this is all going to pay off. I hate the cliché of living in the moment. I don't really want to even use the expression, because I get tired of things that become clichés. But they're true; that's why they become clichés. For instance, I'm talking to you now, and you're in Austin, Texas, right? And I'm at the Carlyle in New York, and we're talking about me, and I'm more interested in that than anything else in the world. Just this. And stay with it. Don't – "Oh God, how can I shorten this interview so I can do such-and-such a thing after I hang up?" If I lived like that, I'd be exhausted. But if you pay attention to what you're saying and doing and think about what you're doing and saying and feeling, then it works.

AC: That's part of the glory of theatre, isn't it? That liveness and that energy between you as the performer and the audience?

ES: Yeah, but you really can't talk about it. You know what I mean? If you're in love with your wife, or I'm in love with my husband [and someone asks], "Why do you think that is?" There's no way you can tell them why that is. Noël Coward used to say, "Learn your lines, and don't bump into the furniture." And really, there's a lot of truth in that. Many a true word is said in jest, and it's really true.

AC: What drew you to theatre in the first place?

ES: I have no idea. Absolutely no idea. Just my exposure to the entertainment world. My mom and dad were theatregoers. They loved the theatre. I was raised in the days when shows would tour the country all the time. We had wonderful theatres in Michigan. The best shows from Broadway came through there. So I was exposed to a lot of theatre as a little girl. [But] nobody in our family went into the theatre except me. And why I did it, I don't know. I loved the movies, but I was drawn to the theatre, and I don't know why.

AC: Did you ever imagine you would have a career that lasted this long?

ES: No. You're too busy living it. You're not saying, "I wonder if I'm gonna ... ." I never did that. Or pray for success. I was very busy walkin' the walk. I'm too busy occupied in the doing of it, so I don't think so much about it. I was a guest at a session at the Actors Studio, and one of the students asked a question: "Elaine Stritch is here. Do you think she practices the Method?" And Lee [Strasberg] said: "Elaine didn't have to learn the Method. She was born with it." Well, I had an idea I'd just been paid a great compliment, but I don't think he meant it as a compliment; he meant it as a fact, you know, that I didn't have to look for reality. I was in the midst of it. That's the best way I can explain it.

AC: Did you feel that sort of connection that you had, the "being born with the Method," was different in you than in other students?

ES: No, I wasn't judging other actors or students or classmates. First of all, I was terrified. So I wasn't thinking about who had reality and who didn't. I wasn't thinking about anything but getting whatever my homework was done and bringing it in to show it to Stella Adler or Erwin Piscator or Uta Hagen and learn. But I didn't have opinions about anything. Thank God. You know, people who are judging other people as they're growing up are gonna waste a lot of time. There was a wonderful old line in burlesque: "Pay the man the 2 dollars." I love it. If I ever had a complaint about money with my father, I'd say, "Well, I don't think they should get that much money because blah blah blah," and he'd say, "Pay the man the 2 dollars." You know, just get on with it.

AC: The first great director you worked with?

ES: Erwin Piscator, without a doubt. He was one of the best directors I've ever had in my life. And he was dear, wonderful. He knew how frightened I was, and he was the kind of director who would get up and do it with you, you know, so you didn't feel so lonely and frightened.

AC: Did the fright ever make you want to quit?

ES: No, it never occurred to me to quit. It just occurred to me every day to handle the fear, you know, to stay with it until I wasn't afraid. And it's amazing when you go into rehearsal for a play – or for anything, this would apply to anybody's career – it gets better every day, and that's so wonderful.

AC: Is it different for you now? What are your feelings when ...?

ES: They tell me to go on the stage? Butterflies. And sometimes I can't wait to tell my story. You know? I really love doing a one-woman show. I love it. I get lonely for other actors, and I'm looking forward to doing another play with some ensemble acting. I love that. But now I know what it's like to work with me. I'm difficult. I admit it. Freely. I was never aware of it until just a few years ago, I think since I stopped kicking my heels up and partying and doing all that stuff. I think you have to quiet down to get an idea of who you really are. I was moving too fast to have any idea of who the fuck I was, as the saying goes.

ES: Well, a lot of the things about me I like, a lot of the things about me I don't like, and I try to work on what I don't like and improve every day. 'Cause I dig change. I just dig it. I want it every day of my life. Chris Lawford is writing a book called A Moment of Clarity, interviewing celebrities and noncelebrities about their moment of clarity when they said, "I'm not going to drink anymore" – it's a good idea – and in my contribution to it, I talked about change and how necessary it was. I started out by saying the worst thing somebody can say to you is, "Oh God, you haven't changed a bit." I love change. And I love somebody to say, "You've changed." It's thrilling.

AC: What's a recent change in yourself?

ES: I think it's easier for me to relax. That's something I've never known [how to do]. I've got to work all the time. I've got to hear the music. I've got to have the lines to learn. I've got to give myself hills to climb every day to make me happy. And I'm relaxed inside more than I used to be. A little bit. Don't get excited about this, Robert. No, no.

AC: We all learn from different people. Is there a person you feel like you learned from the most?

ES: Oh boy, that's a good question. I've never been asked that before. I don't think I can put a name on it. I think the best lessons I've learned in my life are from the common man, from the guy who waits on you in the store or the cop on the corner or the bus driver or the cab driver. The people who service you are the people I learn the most from, and they teach me how to behave. I like to learn from these people. I talk to everybody, and their opinions about big subjects, their opinions about actors, their opinions about politicians are brilliant. I'd rather talk to the guy who's driving the car for me about Obama or whatever. Generally, I will say I learn from people who service me. 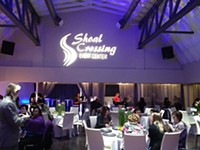 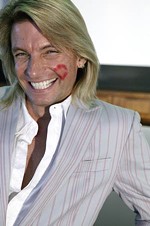 A Diva's Best Friend
Stuart Moulton knows what becomes a legend most. Just ask Carol or Charo or Eartha or Elaine ...