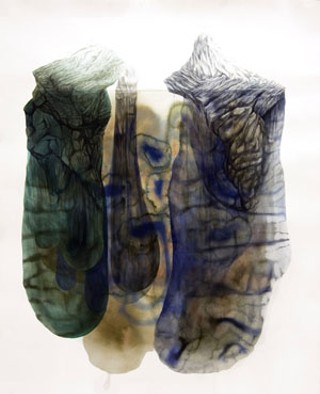 To be precise, we have to acknowledge that people aren't destroying the planet; the planet itself will continue to spin along just fine, regardless of what havoc is wreaked by Homo pimped as sapiens.

It's the people who are doing the wreaking who will eventually be destroyed, in a sort of extended exercise in global self-flensing and poetic justice. "Men come and go, but Earth abides," as George Stewart and the Book of Ecclesiastes so lyrically remind us; and with "Earth," we include the inorganic (icebergs, say) and much nonhuman life upon the substrate: grasses, insects, perhaps even more complex flora and the patterns thereof. Imagine: tangled vines of ivy, the interlocking shadows of trees.

Those last two are the sorts of things rendered in oil on canvas by Marianne Green in her "Silence and Sound" show at D Berman Gallery, while the chilling magnificence of icebergs in all their immensity is captured in deep azurine watercolors on Arches paper by Cynthia Camlin in the concurrent "Extremities" show in that elegant venue. These natural wonderments are captured with expert technique, the precision of the depictions almost scientifically pure, yet orchestrated and amplified by an artist's eye.

Green's near-monochrome silhouettes of plants, gray and dun and dusky, are complexities of pattern broken, almost bracketed, by brief geometric intrusions of complementary or contrasting colors. Their titles – A Victoria's riflebird at the climax of his extraordinary display, A bobolink in its summer home, and so on – suggest that what we see are floral details of larger images from which the named subjects are here conspicuously absent. The silhouettes themselves are muted studies in absence and presence, the positive and negative spaces dancing a shattered quadrille against the canvases' vertical floor.

In the other half of the gallery, Camlin's icebergs, staining sheets of thick paper half the size of a refrigerator door, are symphonies of all the hues that ice of such size and depth can accommodate. Although inorganic, these floating mountains of frozen water can seem, above and (especially) below the waterline, like the internal organs of a body gone fully blue with cold. Appropriately, the delicate and enormous watercolors, enhanced by the artist's complex lattices of white lines so often structuring the bergs' submarine portions, may wreck the Titanic of your heart after prolonged viewing.

These objects, whether living or nonliving, exquisitely celebrated in this pair of exhibitions, are some of what will remain long after we're gone. And here they are now, in two well-worked dimensions, to enjoy while there's yet time: such marvelous adornments for the walls of this big handbasket we're going to hell in.