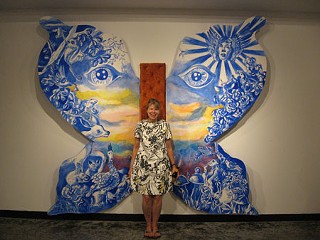 San Antonio artist Katie Pell has named her Women & Their Work solo art show "Tiny Acts of Immeasurable Benefit." I'm glad to report that her art is not tiny; it features bombastically human-scaled butterfly wings, a 4-foot spinning stupa, and a huge charm bracelet carved out of wood that gives a respectful nod to Claes Oldenburg.

To me, Oldenburg's genius was his simple humor. He had the ability to shift the scale of ordinary objects, giving them grandeur; a giant scale engages viewers in a new situational position and view. The act of enlargement by the artist is an underutilized tool, because actually, yes, everything does look cooler really big. It works for Oldenburg, it works for Blue Genie Art Industries, and it works here for Pell.

Rock Star Butterfly and You Are a Beautiful Butterfly, Meant to Be Adored are the titles of the two human-scaled wing sculptures in the show. Pell lists "you or me" as part of the media on the wall cards for each work. With built-in steps and seats, she invites viewers to enliven the bug wings, to be the center star inside the bright cheerful wings. While I just described them as sculpture, both pieces contain large amounts of drawing and painting, respectively. They are ornamented with a cacophony of jungle animals treated in a flowing, connected way reminiscent of Sixties rock album covers or psychedelic posters. Tropical flowers and vines weave around ferrets, birds, foxes, deer, and other creatures. These images are rendered with clear confidence and seem to feature the happy land of things Pell likes. They include portraits of the Rolling Stones, large glowing eyes, and a blank spot labeled "you."

The immeasurable benefit of viewing Pell's artwork is that you are left with a feeling of abundant energy, of a certain liveliness left unexamined, a naive verve unleashed and unapologetic. Maybe it's just me, but I got a feeling that if a girl wanted to be a rock & roll groupie, Pell would advise her to dress up hot and be the best groupie she can be. I don't know how that relates to third-wave feminism; to me, there is something more Mariah Carey about Pell. She likes butterflies, charm bracelets, flowers, animals, sunsets, the Stones, and the Allman Brothers. She is a true patriot, an all-American woman. Her series of serigraphs, also in the show with a combination of text, print, and painting, reveals more complex inner states relating to frustration and desire. A more conceptual piece with a crisp patriotic self-awareness to it adds gravity and depth to her body of work. Stupa for America and People Who Love America sweetly lists "canister containing Pledge of Allegiance in my best handwriting" as part of the media. I say the strongest prayers are those of a righteous woman, so thanks, Pell; America wants your good vibes.