Tweet
print
write a letter
The Flying Wallendas made their name with Ringling Bros. and Barnum & Bailey Circus back in the early and mid-20th century but branched out on their own in the late Fifties. This week, the Greatest Show on Earth returns to the Erwin Center, and for the first time in more than five decades, two members of that famous show-business family, Nikolas Wallenda and his wife, Erendira, will appear in it. The Chronicle spoke with Nik about growing up in the circus, his close friendship with daredevil clown Bello Nock, wire walking, and living with his family on the road. 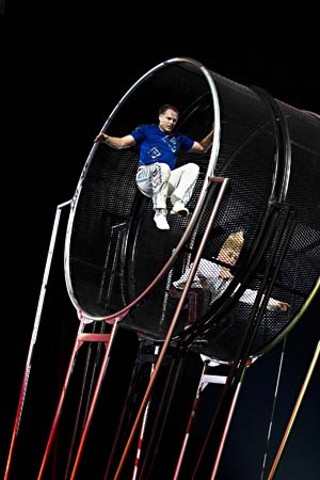 Nikolas Wallenda (l) and Bello Nock in the Wheel of Steel

Austin Chronicle: You're a fairly young man. You grew up in circus?

Nikolas Wallenda: I did. Traveling my whole life. My first performance ever was at 2 years old. That was in SeaWorld in San Diego. I actually was a clown; I got carried out in a pillowcase. I started walking the wire at 4. I don't want to say it was easy; it just came fairly naturally to me, being seven generations in my blood. The first time I got on a bike on a wire, I rode across without anyone helping me. You can get to the point where, especially at a younger age, you're cocky, and you have to learn to respect the fact that you aren't invincible, and if you fall, you can die. At 13, my parents felt that I proved that I was not going to be stupid, that I realized that this is my life up here, and I started performing on the wire with the family.

AC: How did you get involved with Ringling?

NW: Bello called me four years ago and said, "Hey, I want you to come on Ringling with me." Being best friends, traveling for a couple of years, we figured we'd have a blast, which we have. And he said, "Let's do something that hasn't been done before." So we sat down at Macaroni Grill – and I don't know if you know that restaurant, but you can draw on the tables – and we drew up what we're doing today, which is a double wheel of steel that separates pneumatically, and we go in different directions. It's been a huge hit, and the audience seems to love it.

AC: How is it traveling with your family?

NW: It's great. Some people say, "How can you do that?" My wife and I have a beautiful house in Sarasota that we see two weeks a year, and other than that, we're living in a custom-built – I mean, it's as good as you can get on the road, but an RV. And people say, "How do you live that close to your family?" Well, it's something that both of us were raised doing. My wife is seven generations on one side and eight on the other in circus. If I married somebody outside of the industry, I'm sure there'd be many more challenges, but because she was raised the same way as me, this is a way of life. I mean, this is just what we know.

AC: How do you feel when you see your wife doing something so incredibly dangerous?

NW: You know, once again, it's something that I've seen my mom do since I was born. I would be in the stroller by the band, watching her perform. I saw my sister do it. It's just life to us. It would be like somebody saying they're scared because their wife is cutting up vegetables in the kitchen, and she might cut herself. It's just what we do. As long as I know she feels comfortable and respects it, I respect her, and I know that she will be safe and that everything will be fine.

AC: As far as I'm concerned, performers are heroes. They're doing something that so many people can't imagine doing, getting in front of people and making themselves vulnerable in some way. Do you think of yourself as heroic?

NW: Not at all. It's so natural to me; it really is a lifestyle at this point. I have three kids, and they're already involved. I can't imagine doing anything else. Of course, my biggest reward is the applause at the end of the performance. That is what I live for. The paycheck is great, but for me it's about that applause. And it's funny how driven you get. There are some places you play, and the audience is just quiet. Generally in the Latin areas, the audiences go crazy. In performance, you tend to put yourself a little more on the edge the louder the audience and the more the audience is into it. If I'm doing the wheel, it'll go a little bit faster, or if I'm on the wire, I'll jump a little bit higher. It really does drive your adrenaline, the way that they react to what you do.

AC: It must be an incredible feeling for you personally to have the Wallenda name, to have this illustrious history.

NW: Oh, absolutely. What an honor. What an honor it is. How blessed I am to be born into a family like this. And also there's a lot of weight on my shoulders to carry on that legacy and to keep up. The last couple of generations of Wallendas have kind of ruled the waves, and in the next couple of years, I can promise you'll be hearing from me, because I'm working on some stuff that's never been done before, trying to carry on what my great-grandfather [Karl Wallenda] would have done if he was still around. Do things that have never been done by a human before.