Judy Thompson-Price: A Maker of Dances Gets Her Due

It's hard to imagine an old-school Broadway musical without dancing, and it's hard to imagine the Zilker Summer Musical without Judy Thompson-Price. She's been responsible for most of the dancing on the Beverly S. Sheffield Zilker Hillside Theater stage since 1981. Beginning with Fiorello! that year, Thompson-Price choreographed 15 Summer Musicals in a row and has also done five of the last six. And every time, her dances have charmed. It didn't matter whether the show was Camelot or Oklahoma!, Crazy for You or The Secret Garden, her steps added the right touch of sparkle and spectacle to the proceedings. Reviewers typically described her work as "cheerful," "exuberant," and "energetic." Now, considering that Thompson-Price was making her dancers do so much kicking and jumping and spinning in triple-digit heat and smothering humidity, and often in heavy period costumes, you might think their feelings for her would be less than warm. But the fact is, Thompson-Price is adored by the Summer Musical folks, as they showed Saturday, Aug. 9, before their performance of Disney's Beauty and the Beast. One by one, a cast member from each of the 20 Hillside productions she has made dances for came onstage and handed her a yellow rose in appreciation of her contributions to this great Austin tradition. Since the exact nature of the recognition had been kept secret, Thompson-Price was both surprised and moved by the tribute. It was a deserving honor, to which we'd like to add our appreciation of Thompson-Price's talent and dedication. Here's hoping the Hillside is blessed by them for many summers to come. 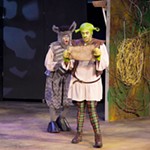