Comic-Con has gone Hollywood, but Austin's comics pros say it's still the place to be 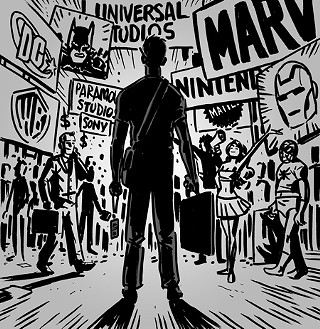 You've seen the geeks totally geeking out (paunchy men stuffed like sausages into brightly colored spandex). You've seen the stars nearly freaking out. ("So, Carla Gugino, how does it feel to be surrounded by thousands of drooling fanboys?") But unless you've ventured beyond the mainstream media's coverage of Comic-Con International, that 800-pound gorilla – hell, the King Kong – of fan fantasy conventions, you probably haven't caught more than a glimpse of the people who write, draw, ink, letter, and edit comics, the working stiffs of sequential art. But the fact is, despite Hollywood's recent invasion and supposed takeover of this 38-year-old event, Comic-Con is still the most important gathering of comics professionals all year. It's "the big show," as Austin comics writer Paul Benjamin says, the place where you can count on seeing just about everyone in the biz.

Benjamin, who recently finished a 12-issue stint writing Hulk for the all-ages Marvel Adventures line, is one of several local comics pros who braved the mammoth crowds – a staggering 150,000 – at Comic-Con this year. That's like beaming every resident of Round Rock, Leander, and Pflugerville into the San Diego Convention Center for four days. But Comic-Con's size doesn't deter this 12-year veteran. "I could choose not to go to that convention," he says, "but I go there because everybody's going to be there, and everybody has to be there because it's the big show."

Having that contact with colleagues is all the more important because of the solitary nature of the business, argues artist Nick Derington, whose work can be seen in the Image anthology Popgun and The Phantom, published by Moonstone: "Being a cartoonist means many hours, days, weeks sitting in a home studio working by yourself with no peers to go to lunch or hang out by the water cooler with. In that sense, San Diego provides a heavy-duty dose of socializing, networking, and much much-needed human interaction for many cartoonists." Derington, who made it to Comic-Con for the eighth time this year, feels that isolation all the more keenly in a place like Austin, which is so far removed from the industry's hub. "Unless you live in New York or L.A., there are no large concentrations of people who do what I do," he says. "So it's nice to go have a drink with someone who speaks the esoteric language of making comics. Honestly, it's not just a job but a lifestyle." Matt Sturges agrees: "When the majority of your work consists of sitting in a room by yourself typing, you tend to look forward to these sorts of things." But for the co-writer of Vertigo's Jack of Fables and House of Mystery series, it's not just the charge of meeting colleagues; it's also connecting with his audience. "Of course, it's always nice to spend time with fellow creators – there are quite a few professionals that I only see at Comic-Con, and that's one of the primary selling points for a lot of comics creators. [And] getting personal feedback from readers carries a lot more weight than what you get on the Internet. It seems more real somehow. And Comic-Con has the highest concentration of readers by far than any other convention I attend."

All three creators acknowledge the changes in the convention wrought by the increased presence of film and television, but they take issue with the notion that comics have disappeared from their own event. It's all about knowing where to look, says Sturges. "Comic-Con has become such a large event these days that it's as though there are multiple conventions going on simultaneously, and they just happen to take place on the same convention floor. I spent the entire week talking to comics fans and professionals, attending panels about comics, and drinking with comics people at the hotel bar. There are entire subsets of media and fandom that have always been there, like the fantasy illustrators, but that operate in an almost parallel reality. Those illustrators have their own little corner of the convention hall, they drink at a different bar at night, and they appear to have a wonderful time doing so."

Having TV and film on board "has certainly made the convention larger and more unwieldy, but at the same time, there are a whole lot more people at the convention, and that's to the good," says Benjamin. "Don't get me wrong, it makes things a lot more difficult, and in some ways it's frustrating, but it's a lot better than having everything shrink."

From Sturges' perspective, the heavy Hollywood presence is a plus not only for the convention but ultimately for the medium it was founded to celebrate. "There's still a hefty comics presence at the show, and they're getting more exposure than ever," he argues. "A sizable fraction of the attendees aren't coming for the comics, true, but those people end up being exposed to comics in a way they might not have been otherwise. Hundreds of people came through the DC booth while I was there – no doubt looking for Batman swag – and quite a few of them picked up the free comics that we were handing out. Did they all read them? Probably not. But some did, and some of those lucky folks will become comics readers as a result. To paraphrase Rorschach in Watchmen, we're not set up in there with them; they're set up in there with us."

"Comics are a crazy small industry," adds Derington. "Normal people don't read them. Hell, normal people don't read 'real' books anymore. The fact that Hollywood is pouring money into the comics industry is fine and dandy by me. That just means more comic artists get jobs making comics instead of having to draw storyboards for tampon commercials or illustrate place mats for McDonald's or, worse yet, be forced to get 'real' jobs like moving boxes at UPS or slinging coffee at Starbucks. This shit happens constantly. Whatever brings more attention and money to this dying medium is aces in my book."

So how much is this mainstream attention for Comic-Con affecting comics? Was there a sense at this year's convention that these are good times for this "crazy small industry"? "Obviously everyone's experience is different, but the sense I got was mostly positive," says Sturges. "It's a very interesting time to be in comics, especially as regards the popular culture; Hollywood seems to be obsessed with superheroes right now, and it's never been hipper to read comics than it is today. Books like Watchmen and Sandman and Fables are viewed less and less by the culture at large as 'that weird stuff over there' and more as part of the fabric of literature in general. The sale of graphic novels and trade paperback collections in bookstores has helped a lot – people who'd never darken the door of a comic-book shop can get their hands on comics now and fall in love with the medium."

All of which leaves Derington a little dazed. "As a lifelong genre-fiction fan and comic-book geek, I honestly feel like I am in the Twilight Zone or perhaps in Bizarro World," he says. "Never in my life did I think I would be able to talk to my dentist about the existential repercussions of Batman or see housewives giddy about Hellboy. The fact that a fucking Watchmen movie is about to come out melts my brain. Never, never, never in a million years did I think this secret little world of stories would be understood by the mainstream public. It's very, very good to be a nerd right now, and it's even better to be one of the guys making this stuff for the world to love instead of for a handful of comic-book cult members."

Benjamin feels that the state of the industry may depend on where you are in it. "If you're in the superhero side of things, you're excited that all the superhero movies are doing well. If you're on the manga side, [the publisher] Tokyopop has recently had a big contraction because of some of the problems Borders Books has been having, and that has made things really difficult. As one of Tokyopop's creators, it would be really easy to be depressed when your publisher runs into problems, but I've been in the business long enough that I've seen publishers come and go, and I've seen some publishers who were in trouble keep on going. I worked for Marvel in one of its divisions during the layoffs and subsequent bankruptcy. Look at Marvel today."

So was this year's Comic-Con productive for these creators individually? For Sturges and Benjamin, both of whom are still early in their careers as comics writers, the answer is definitely yes. "I only started my writing career about three years ago," says Benjamin, "and between last year and this year, I've published 12 issues of a Hulk comic, a second book in a graphic-novel series [Pantheon High with Tokyopop], and a bunch of short stories. So I have a much larger body of work this year, which makes a big difference when you go up to a publisher. Very different saying, 'I have a bunch of stuff I'm gonna be working on,' and 'Here's a list of stuff I've done.'"

"I have several more books out now than I did last year, so more people are familiar with my work," says Sturges. "I don't have to try as hard as I used to. And I have plenty of work, so I didn't have to spend time going from editor to editor with my hat in my hand. Which was a much welcome change of pace."

Derington benefited professionally as well, though he isn't at liberty to say how just yet. ("Expect some big project announcements by the end of the year.") Instead, he talks about how the very bigness of "the big show" feeds him creatively. "The information overload keeps my creative juices flowing for the rest of the year. It's just acres of people and their projects – projects of every skill level, which can boost your ego, greatly humble you, and, best of all, egg on those competitive feelings that force you to work those long hours and get better and better at your chosen craft."