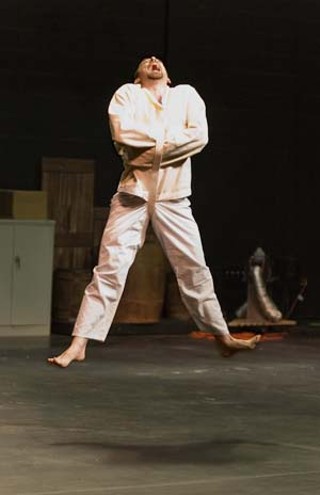 Kaplan, a performance artist (for lack of a better term) who works out of Denton, Texas, came to the arts fairly late in life. "I was a history major at a liberal arts college in the upper Midwest, all set to pursue a career in the State Department. I was a senior, an undergrad, and then I took a modern dance class for fun my last semester, which was a mistake. The class was great, but I couldn't touch my toes or remember any of the steps. In any case, I had a blast, and I realized that sitting at a desk was not for me.

"I was also singing for the first time with my college group, and we ended up going on tour. We performed at Carnegie Hall, so that was one of the first theatres I ever performed at. And you know, what can I say? It was an instant addiction. Just instantaneously, being onstage was it; that was just it."

In K.Lear, Kaplan performs the entire third act of Shakespeare's masterpiece word for word, playing all the characters while constantly dancing, but with no accompaniment other than his own voicing of Shakespeare's text and wearing nothing but a straitjacket and medical scrubs. "In general, I look for the most ludicrously difficult things possible. I mean, just off-the-wall hard things. I'm really attracted to complexity. And as great and brilliant as the Bard is, there's all of his plays, and then there's King Lear. The sophistication, the command of language, the characterizations – to me it's just so superior in every way to everything else. It's structured like a play, but it doesn't feel like one. It has that sense of otherness that I'm attracted to.

"I also am coming to believe strongly that Shakespeare didn't write tragedies in a Greek sense. He wrote about insanity, and he was particularly attracted to the intersection of power and insanity. He's talking typically about kings that go crazy. But I started to treat all the characters in the act as different voices, and without changing a single line of the text, I just found that it worked. The language really lends itself to the metaphor of a splintering mirror. There's almost a T.S. Eliot thing going on, this fracturing of the psyche."

Kaplan will present K.Lear in Austin for one performance only, Saturday, Aug. 9, 8pm, at Cafe Dance, 3307-B Hancock. Seating is extremely limited, so reservations are strongly recommended, and because of the intimate nature of the space, late seating will not be permitted. Also, be ready to take your shoes off, as it's a strictly barefoot event.