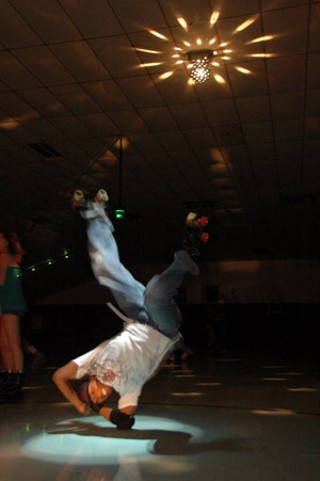 Ever since I broke my arm while skating at a birthday party (my own, sadly), the roller rink has not been for me a place of great joy. But Forklift Danceworks' latest has changed all that.

Sitting cross-legged on the track at Playland Skate Center, listening to hits of the Eighties reverberate through its cavernous interior, feeling the rush of air from skaters dashing past at a distance of inches, and seeing the elation in those skaters as they glided and spun and raced about in fluid ovals, I rediscovered the euphoria of roller-skating – especially when it's done in big barns like Playland, where people of all ages slip into little boots with wheels and go 'round and 'round together along the same curved trail.

Skate! A Night at the Rink was nothing if not a big wet kiss to the communal experience of roller-skating. It started with the venue itself, a place where generations of Austinites have skimmed across the floor with glee; Playland, like most rinks, ain't much to look at, but it has all that history pulsing through it, which gives you a sense of being in a long line of locals who have skated (and fallen) on that track. Forklift Artistic Director Allison Orr made that tradition explicit by playing recorded memories of skaters (not always easy to hear, but the sentiments were clear) and vintage organ music taped at a rink more than 50 years ago. Since more than half the numbers in the hourlong program involved large groups of skaters, they evoked the look of the rink as it usually is: full of folks of all different ages and sizes and shapes and looks. As all but a few of those skaters were Playland regulars, folks for whom the rink is a second home – make that a place to be with others who derive the same freedom and pleasure from this simple activity – you could see that common delight in face after face as they circled past you, just as you could see mouth after mouth singing along with ABBA on "Dancing Queen" and Michael Jackson on "Don't Stop 'Til You Get Enough." Which brought home another part of the rink's charm: Those hits blaring over the loudspeakers are ones that everybody knows, ones that, even if we think they're cheesy – can you say, Journey's "Don't Stop Believing"? – we'll join in on the chorus with everyone else on the track. Orr drew on every aspect of the roller-rink experience, even the insecurity we all felt as clumsy beginners (played for laughs by Orr herself in a cute bit with Playland's "Mr. Rollerskate," Michael Febonio), to remind us how this hall of amusement serves as a center for shared experience, for community.

That said, Skate! was also a true dance performance. While only a few of the 30 participants were trained dancers, the show did what all good dance productions do: gave us a heightened awareness of movement and helped us see the artistry in it. Throughout the show, you could spy all the familiar skate moves – the one-foot push-off, the scissoring legs, the swinging arms, the lean into sharp turns, the backward glide – and they played up how unnatural much of the movement in skating is (how much sense does it make to move backward?) and yet how beautifully we have adjusted to it. Some have adapted to moving on shoes with wheels the way others have to moving on horses, and the movement of an experienced skater is like that of a fine rider: graceful and smooth and distinct from the movement of a human form on its own. You see these elegant circles and loops and spins, and it's a marvel.

And how marvelous for Orr to bring it to our attention, to refresh our senses with how remarkable skating is and how accessible and how much sheer unadulterated fun. We may overdo it occasionally with calling shows a celebration of something, but when a show plays out like a party and ends with an invitation to the audience to strap on some skates and join in, what else can you call it? Skate! was a party on wheels and festive enough to make at least one guy forget a long-ago broken arm.