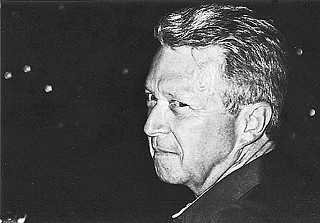 Seven weeks after being honored for his meaningful contributions to and support of the arts in Austin, Don Howell has passed away. The former high school theatre teacher, patron, and new inductee into the Austin Arts Hall of Fame died peacefully in his home on Monday, July 21. He had been fighting throat cancer for many months. Howell was best known and appreciated for his interest in fledgling theatre companies and his willingness to share his experience, expertise, and encouragement with them as they try to make a go of it. He came to Austin in 1992 and made a critical difference in the survival of several now indispensable theatre companies: Vortex Repertory Company, Frontera Productions (now Hyde Park Theatre), Physical Plant Theater. He was also a great friend to some that came and went too soon: the Public Domain, Troupe Texas, and Deus Ex Machina, among them. His patronage was intensely personal: seeing shows, having long conversations with artists, and sharing theatrical goods – costumes, set-pieces, props – from his own collection, gathered through his years of teaching in Alice, Texas. When about 20 mostly young, mostly poor alternative theatre companies from around the country decided to meet in Iowa City in December 1994, Howell organized a contingent of local companies to go. Thus, Frontera, Physical Plant, the Public Domain, and Salvage Vanguard Theater were at the forefront of the national alternative-theatre movement called the RAT Conference, a move that had a profound effect on theatre in Austin and around the country in the Nineties. Perhaps Howell was just repaying a debt to the legendary Texas theatre artists who had nurtured him in the Forties, Fifties, and Sixties, notably Margo Jones, Paul Baker, and Nina Vance. In addition to assisting young theatre companies, Howell volunteered for the Austin Circle of Theaters, was an independent producer, acted and worked as a dramaturge for the Austin Shakespeare Festival, and served as a panelist for the Texas Commission on the Arts and Austin Arts Commission. He will be missed. Howell insisted that there be no funeral service, but his friends may put together a memorial event in the future.