Austin Museum of Art's exhibit is successful in revealing nuances of LeWitt's work, but less so in showing art by his peers

Sol LeWitt is typically identified as a key figure in minimalism, although his work is more connected to conceptual art, a movement where LeWitt was, and still is, seen as influential because of his texts "Paragraphs on Conceptual Art" (1967) and "Sentences on Conceptual Art" (1969), both published in Artforum. LeWitt defined conceptual art as art in which "the idea or concept is the most important aspect of the work. When an artist uses a conceptual form of art, it means that all of the planning and decisions are made beforehand and the execution is a perfunctory affair." What is intriguing about LeWitt's vast body of work is how much he was able to explore within art's most basic elements: lines, shapes, structures, and the cube. These became the axes for most of LeWitt's explorations through various structures, photographs, drawings on paper, and large-scale wall drawings. These wall drawings have a set of instructions, so anyone can carry out the piece, and in this way LeWitt acted more like an architect than an installation artist. LeWitt's titles refer to the way in which the works themselves are carried out, providing dry descriptions rather than revelations of hidden meaning, as with Horizontal and Vertical Bands of Color. However, LeWitt's work doesn't stop there; he was an avid collector of his peers' work, most of which he obtained through trades for his own works.

In this lies the premise of Austin Museum of Art's exhibition "LeWitt x 2": to reveal nuances in LeWitt's work by placing it alongside work from his collection and to provide context for those artists by showing their work with one another. Overall, the show is successful in regard to LeWitt's work, but less so with the other artists. The most successful combination is in the first room of the collection, where work by conceptual artist Dan Graham is presented alongside work by sculptor Siah Armajani, photographers Bernd and Hilla Becher, and photographer Hiroshi Sugimoto, among others. The relationships appear to have more of an architectural backbone and are more intimate.

The entry gallery presents works by LeWitt alongside works in the collection, but more significantly it introduces "the cube." LeWitt's cubes tend to be more open geometric structures, but his collection includes Hans Haacke's Condensation Cube, a small Plexiglas box that appears to be sweating. (The condensation is set in motion by the temperature of the gallery.) Haacke's cube sits nicely within LeWitt's work as a structure, but also has an element from the environment. The relationship of this minimal object to outdoor elements makes the viewer aware of LeWitt's interest in the environment and how it reacts or relates to these structures.

Another piece that fits nicely within LeWitt's work and the collection is Dan Graham's Row Houses, Bayonne, New Jersey, from the series Homes for America. Graham's color photograph is a rather banal image of a group of houses sitting side by side, shot so they vanish into the background from the right-hand side of the image to the left-hand side. They look like cookie-cutter Fifties homes in a rainbow of muted colors from navy blue to olive green. If you stripped away the idea of them as homes and looked at them as just geometric shapes, you would see a similarity to LeWitt's cubes. Through the photograph, LeWitt's large cube structures become more intimate and maybe more personal.

In the last gallery are LeWitt's later works, from the 1980s to 2005, which show an explosion of color and curves. The shapes here are more organic than the rigid lines of his earlier works, and Brushstrokes (2000) and Horizontal Lines (1997-2005) appear to be more in the vein of abstract expressionistic paintings. Ironically, when Lewitt came to New York City in the late Fifties he was making large paintings, which he was dissatisfied with, leading him to creating a set of rules for his structures. But it was through these restrictions and limitations that LeWitt was able to find a more emotional voice. 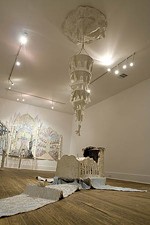