'US': Celebrating America in the mix

Graphic artist Ricardo Acevedo goes by many names. He'll answer to Ricardo or Ric. He'll also answer to r/ace, which is probably most appropriate. "I describe myself as zeitgeist," says r/ace. "I like to do things that push conversation, that make people talk. I think the responsibility of art is to do that. My parents were beatniks. And the beatniks, not the hippies, were the predecessors of the radicalism of the Sixties and the punk movement of the Seventies. I was always raised to believe that 'art' stood for 'active radical thought,' and that's what I've always moved toward."

Consider r/ace's latest exhibition, opening this week at DiverseArts' New East Arts Gallery: It showcases color photographs of mixed-race individuals, couples, and families in their home environments. Titled "US: In the Mix; the Changing Face of America," the exhibit was inspired by the presidential run of Barack Obama. "I bristle when I hear white or black folk say, 'He's just a black man,'" says r/ace. "No! He's more than just that. He is the distillation of America. Of people from another country and from this country coming together. He's what America is: a mixing culture. That's only a radical idea to people who are afraid of America being something other than white. Most of us in the blue-to-white-collar populace interact with people who are mixed-race or are in mixed-race relationships on a regular basis. Who are these people who would comfortably say, 'No, this is a white country'? It's just fear-mongering. There are so many of us who have always had a deep love of and fascination with the other as opposed to a fear of the other. The other is what makes us more of what we are. And isn't that the premise of evolution – cultural, spiritual, physical evolution? The embracing of the other to create the new us?"

But r/ace isn't really about race. That's only his jumping-off point. He's about art. "I wanted to inject into the race conversation what I thought was beauty. The sublime. All these people of different races who have come together in the name of love or passion. These are people who have shared ideologies that go beyond their race or culture. That's something that can only happen to the degree that it happens in America."

So "US," in all its obvious titular ambiguity, celebrates the truth about America and, specifically, the possibility of a man of mixed race holding the land's highest office. "After eight years of a very nonintellectual person in the office, to have a person like Obama – he could have been offended when his racial beliefs were questioned, he could have lashed out, but he chose, for lack of a better term, to educate. I was on the fence about him until that moment. Then I went, 'Yeah, that's who I want as my president.'" 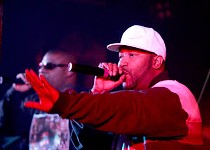