J.T. Rogers' play about racial attitudes is timely, but its agenda gets in the way of its characters 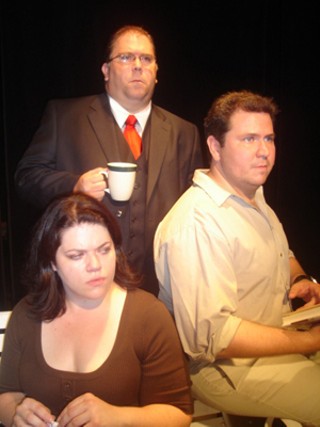 Just this week, The Washington Post reported that Barack Obama's presidential candidacy has spurred an increase in activity among racist and white supremacist groups – proof positive, as if any more were needed, that race relations in the U.S. remain as strained as ever and that many of this country's palest citizens, despite their longstanding cultural dominance, continue to feel agitated or threatened by those whose skin color is a different hue. Which also means that J.T. Rogers' drama about white people and their feelings on race has yet to lose any of its timeliness in the seven years since its premiere.

The play probes the raw nerve of racial attitudes through three characters, all Caucasian: Alan, an idealistic history professor in New York City; Mara Lynn, a working-class young wife and mother wrestling with marital disappointments and an ailing child in Fayetteville, N.C.; and Martin, an attorney for a high-end law firm in St. Louis. The geographic and economic differences among them seem intended to provide a variety of perspectives on what whites think and feel about race, but Rogers has also seeded their monologues with similar phrases – gulfs and chasms, tongues swelling in their mouths, not having words to describe something, being unable to see – that bind the three together and suggest that if you're white, no matter where in the country you live or where on the economic ladder you sit, you suffer from an inability to talk about race or even see the racist qualities in your own behavior. Now, whether or not you think Rogers has a valid point, the way he's built it into the script rather undercuts his efforts to make these three characters into living, breathing individuals and not artfully constructed arguments for a specific agenda. You can see the author's hand at work, and no matter how much emotion and skill the actors bring to their roles – and you could hardly ask for more heartfelt and considered performances than the ones in this City Theatre production – they never quite emerge as fully realized.

That's rather a shame because Rogers' aim – to further the American dialogue on race, even if it means dragging deeply buried, unexamined prejudices of whites kicking and screaming into the light – is a worthy one, and the actors here do all they can to honor his intent and deliver honest, unflinching portraits of people whose attitudes toward those who are different in some way – a young black woman who uses slang, a doctor of Indian descent, a Latino man who doesn't speak English – are not always admirable or generous. Breanna Stogner's Mara Lynn is a pot of barely contained disappointment and rage that occasionally boils over at the perceived injustice of immigrants taking jobs that "belong" to those born here. Wray Crawford's Martin spears each member of the audience with a steely gaze that epitomizes his businesslike, supposedly clear-eyed approach to the world, unaware that he is in his own way blind until a violent event blindsides him. And Charles P. Stites, who also directs the production, conveys Alan's anguish over his own prejudices through stumbling, stuttering speeches that climax in cathartic anger.

It's hard to quarrel with these performers' work or with the timing of the production. We need to be talking openly about race now as much as any time in our history. It's just that this vehicle for that discussion might do more to engage us if it seemed to come as much from the heart as from the head.