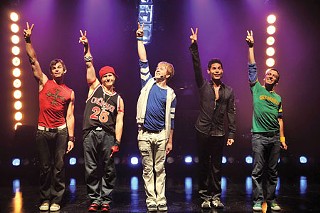 To get the full effect of Altar Boyz, spend some quality time beforehand with online videos of boy bands. Suddenly it all comes back: the synchronized dancing in triangular formation, the careful arrangement of harmonies, the gratuitous flexing of perky biceps, the inane dialogue between songs.

All that's missing from Altar Boyz at Zach Theatre are the legions of shrieking, screaming fans who never draw breath. Instead, this production inspires mostly laughter as the audience enjoys the guilty pleasure of watching sexy young men dancing and singing together in a line. But it's okay, see? Because the show is mocking the format. Wink, wink.

The story, such as it is, is that four altar boys from Ohio named Matthew, Mark, Luke, and Juan were hanging out with their Jewish friend Abraham when they all heard the voice of God, who told them to go out among the masses and save their souls with some showbiz dazzle. In no particular order, Altar Boyz makes fun of boy bands, Catholicism, contemporary Christian music, closeted gays, gay Latino pop stars, boy-band costume designers, simplistic theology, unrequited gay crushes, commercialized Christianity, and occasionally someone in the audience.

With such a long list of targets, it's perhaps not surprising that the success of Altar Boyz depends on what you bring into the theatre. Those with baggage from a Catholic upbringing, teenage gay-bashings, or a really bad time at an 'N Sync concert will feel right at home. People who love lots of flashing stage lights are good to go. Just know what you're getting into.

Director Dave Steakley says in his program notes that the musical is a "gentle parody." The gentleness all depends on your perspective, see. Take, for instance, these lines from the song "Rhythm in Me," sung by ostensibly gay boys: "God put the rhythm in me./Put it in me!"

Now, really. Whatever anybody says, sex is a loaded subject in society, both secular and religious. If you just so happen to be a practicing Christian (or Jew), even a sexually active one, there's something about that line that just ain't right. It's smooshing a sensitive topic right in the face of that which is supposed to be treated with respect. If you're not a practicing Christian (or Jew), there's no issue at all, except for the glee in imagining what shade of purple Pat Robertson would turn if he were sitting next to you.

Enough of the perspective talk. Flimsy as the script is, there are clever bits. The five men of the cast have got the subjects of their parody down. If at times the choreography (re-created from the Broadway production by Case Dillard) seems a little less aerobic than that of actual boy bands, it's because these guys really are singing as they pull signature moves dating back to New Kids on the Block. No voice tracks play under this performance!

That's one of the pleasures of Altar Boyz. Everybody in the theatre world knows that every successful boy band is a short-lived, lucrative sham. Isn't it great how, if given a chance, a handful of workaday, trained stage actors can wipe the stage with the likes of Joey Fatone?

If only we'd thought of it first.