McCallum Fine Arts Academy: 'Rent' Due After All

AISD pulled its sponsorship of a districtwide production of Rent, but the show will go on at the McCallum Fine Arts Academy

Tweet
print
write a letter
The show will go on.

In May, officials in the Austin Independent School District nixed the idea of Rent, Jonathan Larson's Pulitzer Prize-winning rock update of La Bohème, being produced as a district-sponsored summer musical in which fine-arts students from across the city would participate. Their only stated rationale was that the work would not be well-received in some campus communities – what was left unsaid was that a few people might freak out over the presence of drug use, HIV/AIDS, and homosexuality in the show. (This even though the production was using a version of the script adapted for high schools that tones down some of the most potentially objectionable material.) The decision was especially disheartening because it came after months of preparatory work had been undertaken, auditions had been held, and students from across the district had been cast.

Enter McCallum High School principal Mike Garrison in the role of angel. He agreed to have his school host the production, just as it did the previous summer's production of A Funny Thing Happened on the Way to the Forum, which was also staged with students from all over Austin. (It was the great success of that production that prompted AISD to want to sponsor this summer's show.) The Theatre at McCallum Fine Arts Academy technical director M. Scott Tatum, who was one of the prime movers behind last year's All-City Musical production of Forum and this year's production of Rent, says that the production team of teachers from various AISD schools are still on board, the districtwide student cast is the same, and the show is on target for the original run dates, July 17-20, at the Theatre at McCallum. All that's missing is the money that would have come from AISD. Tatum is pulling some funds from the academy's 2008-2009 budget, and some parents of academy students are working to raise cash through the theatre program's website – www.mactheatrefund.org – but the biggest show of support would come from Rent's four performances selling out. If you want to see how local high schoolers handle this high-energy rock musical or just want to reward the perseverance of these teachers and students, get a ticket. 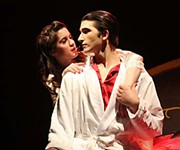