During a break in rehearsal, Aztlan Dance Company member Stephanie Mayorga Keeton confides, "We've got to get it together." With only a couple of weeks left until the company's first full-length show at the Long Center opens – marking the beginning of a partnership between the East Austin troupe and the Downtown venue – the company is putting in five hours of rehearsal on a Sunday. Artistic director and choreographer Roén Salinas repeatedly encourages the dancers to tighten their technique and "give it some love."

The piece, titled Jalisco: Now & Then, is a revised version of a work from 2001. The only aspect of the show that hasn't changed, says Salinas, is the costuming; the story, set in a fictitious Jaliscan village, has been rewritten, and the soundtrack, which pairs mariachi greats with diverse contemporary musicians, is all new. Keeton, 29 and a nine-year veteran of the company, dances the role of Marcelina, who confronts diablitas and la muerte before deciding to take charge of her dreams and premonitions, thereby ending up ever after with her life's love. In rehearsal, Keeton periodically steps out of the formations to assist Salinas with the group, giving corrections about the accents in the arm movements or clarity of the steps. Accents of red distinguish her rehearsal clothes; she is the only female dancer not outfitted entirely in black.

Keeton, who by day works the front desk at a real estate office where her co-workers call her "Cha Cha," happened upon the Aztlan company because it was the first dance company listed in the Austin phone book. It wasn't an instant match. She was "freaking out" during rehearsals for her first show with the company, she says, and she and Salinas had some differences in method. Though she had studied and performed traditional Latin with Ballet Nacional in Corpus Christi, she had little experience with contemporary dance. But now she says that she feels challenged and fulfilled by Salinas' approach to meshing traditional and contemporary dance. They collaborate well, and in class and rehearsal, Keeton isn't shy about voicing her opinions. While Salinas often focuses the company's practice on "indigenous," grounded movements, she explains: "That's where I come in. I'm like, 'We need to work on leaps and turns!'"

When she's not keeping the company in line – sometimes literally – or making sure things run smoothly at work, Keeton is keeping tabs on her family. Neither her husband ("no rhythm") nor her 12-year-old daughter (prefers reading) likes to dance. "More spotlight for me," she jokes, but she acknowledges their support. Her husband comes to every show she dances and even helps tend bar during performances at the Santa Cruz Center for Culture. "I kind of struggled with him at first," Keeton admits. "But I was like, 'You know what, dude, I need this – this is my life.' And so he deals with it." 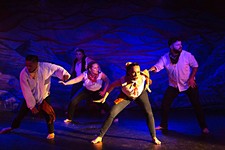