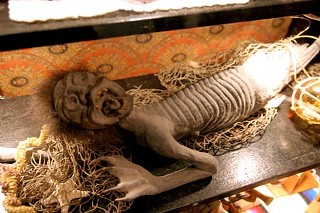 You think you have weird roommates? Consider Jenny Hanniver's situation: Her co-habitants are the corpse of a two-headed calf, several tufts of ultraviolet-reactive fur from a genetically modified cat, a funeral ornament woven from the hair of the deceased, casts of Sasquatch footprints, and Anton Szandor LaVey's penis pump. Among other strange things. And Jenny herself, she's a dead skate – a large, stingraylike fish – that's been sliced and folded to resemble something vaguely human and is now framed under glass and hanging on a wall.

"Welcome to the Museum of Natural and Artificial Ephemerata," says another Jenny, this one Jen Hirt, a live, ordinary human and co-proprietor of the house-sized cabinet of wonders in the 1800 block of Singleton Avenue. Hirt smiles, her pulled-back hair and quaint style of dress recalling, what, some domestic servant from an Edith Wharton novel? Next to her stands her partner, Scott Webel, grinning above a neat bow tie, his striped pants secured by a pair of old-timey suspenders.

The two of them have been doing this since the late Nineties: presenting exhibitions of the weird and storied objects they've stumbled upon, tracked down, or had loaned to them by an eclectic circle of friends and acquaintances. The current exhibition, "Monstrosities," for instance, contains much from the collection of the traveling freak show called 999 Eyes and from entomologists Barrett Klein and Graham Criglow.

"The original museum actually dates back to 1921," says Hirt. "It was put together by Madame Mercury Curie and Rolls Joyce Jr. in Tucson, Arizona."

"Rolls Joyce Jr. is Scott's great-granduncle," says Hirt, speaking in a slow and steady cadence, laying her words out as if they were precise displays in some museum of communication. "He and Madame Mercury Curie had a thriving curiosity museum near the beginning of the last century, and they looked at it like a museum of museum forms. The whole thing, upon their deaths, got boxed up, and we later discovered a few of those boxes in Scott's grandmother's shed – there are still a few more boxes at large.

"After we got the boxes from Scott's grandmother, we opened the museum up in our laundry pantry in our little rented house. We put a board over the laundry sink and put velvet cloth over the board and started plopping displays down and inviting people over. And only two or three people could fit in the room at one time. So we have very humble beginnings."

The young couple moved to Austin in 2001, after Webel was accepted into the University of Texas. 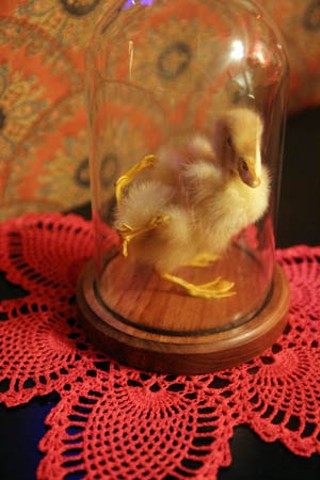 "I got into grad school here," says the bespectacled curator, "into cultural studies through the Anthropology Department, and started a master's. So we moved the museum here. And our first place here was also very small, like a little tiny bedroom that you could fit a futon in. And we'd fold up the futon, and the room had in-built shelves, so we put the museum in there. We could give tours to around eight people at a time." He's more animated than the careful Hirt, his words coming faster, his eyebrows and hands kinetic accessories to his speech.

"We started out with that place in West Campus," he says, "and then North Campus and then in Hyde Park. And then we moved here and eventually bought this house."

"Austin's been a very receptive community," says Hirt. "People are really supportive of the museum, and we've made a lot of friends here. And I've got a job teaching art at a Catholic school a few days a week – I finished my master's back in Tucson."

"I'm a student again," says Webel, "in UT's Ph.D. program in anthropology. I took three years off and was doing design work, working at the Tarlton Law Library on campus, doing their print publications and their website, which gave me a lot of opportunities to learn about print. I like using the old P.T. Barnum-era technology of printing: linocuts and etchings and stuff like that. That world's still alive."

It certainly seems alive in the house at 1808 Singleton.

"We really love this space," says Hirt, "because we have three full rooms for the museum, and we can keep our cats out."

Good thing, being able to restrict the access of felines: Many of the items on display in the charmingly appointed venue – whether in this season's "Monstrosities" or in what's called the "Impermanent Collection" – are just the sort of delicate objects that could be destroyed by the attentions of any cat as yet unkilled by curiosity. There's a two-headed ant, the world's heaviest cockroach, a butt from the last cigarette smoked by Marilyn Monroe, a taxidermied pygmy kangaroo, the skull of P.T. Barnum's organ-grinder monkey, a lock of hair from the head of Elvis, and "A Replica of the Soul of Chopin's Last Piano."

Of course, most of these miracles are high up on the walls or otherwise protected by glass frames or display cases. Still, who knows what sort of havoc might be wrought upon the museum – especially the entire wing devoted to sleep! – by a determined tabby on the rampage? All the hours of work ("We do all of the displays here," says Hirt; "we fabricate and build them by hand") would be undone, all the ephemeral wonders lost to the ages. That is, if they are wonders at all, some of them. A lock of hair from the head of Elvis? A cast of a Sasquatch footprint? Certainly there's more art than science to be found in this museum; surely that's obvious from the get-go – why else would the Austin Museum of Art choose Hirt and Webel to be part of their most recent "20 to Watch" exhibit Downtown?

Still, many of the objects in the museum are undeniably what they're claimed to be. A pygmy kangaroo is a pygmy kangaroo, no matter how you stuff it; there's the ocular proof right in front of you, and you can even pet it if you wish. And, too, there's a seductive feeling of legitimacy, no matter how manufactured, attending even the most outlandish displays in these three small rooms. Even the strangest ... say, what is the strangest thing in the museum? Or what has provoked the strongest reaction over the years, from the "Animals" exhibition, from the "Ghosts" and the "Machines" shows, or from the "Impermanent Collection"? 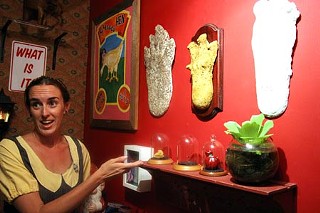 Webel points to the shadow box holding a penis pump formerly owned (or so it's purported) by the Church of Satan's Anton LaVey.

"Yeah," says Hirt with a slight smile. "I'd think so, too. We only brought that out recently."

"I guess that's the most risqué thing we've ever shown," says Webel. "But not necessarily the weirdest. It's kind of surprising how little really shocks visitors in the museum. People will be curious, and they'll think something's funny, or they'll cringe or go 'ew' a bit. But the things we've been most reluctant to show because of the possible reactions, the reception's always, 'Oh, huh,' like it's no big deal. So we've learned to just show what we've got."

"People are surprised by the narwhal tooth," says Hirt. "They're surprised by its size, along with it being the fabled unicorn horn and that it belonged to a whale."

"Another horn, the human horn, always gets a reaction," says Webel.

"That's from the original museum," says Hirt. "It was grown by an unfortunate Miss Baedeker of New Jersey, New Jersey. She grew three horns, each growing in a spirallike post from her head. Two have been lost; we have the one that remains."

"Things that are part of what we call the 'Abject Collection,'" says Webel, "actual pieces of bodies and human mortality on display – those always get people in their gut. One piece that somebody loaned us anonymously is part of one of the airplanes that hit the Twin Towers in New York, a small piece of it. We were kind of reluctant to show it, not wanting to upset anybody."

"And when we did finally show it," says Hirt, "we were overly conscious of the context while creating a shrine and a description saying what it was. And people were very accepting of it, just as a piece of art." 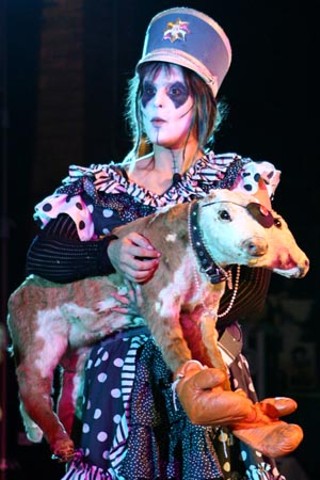 Patches and handler performing at 999 Eyes (Photo by Shelley Hiam)

What is it about an object's context, sometimes, or the fame of an object's owner – like John Wayne's Frankenstein Lightbulb or Marilyn Monroe's Last Cigarette Butt – that makes it worthy of displaying, that gives it a sort of aura of enchantment? Even assuming the provenance is authentic, why do people find value in such things?

"Well, the cultural critic Walter Benjamin is the one who went on and on about the aura," says Hirt, "about how adding a piece of glass in the distance between the viewer and the object imbues it with this specialness. And that's also tied in with anything belonging to a celebrity. For example, people are still asking about David Hasselhoff's Jolly Rancher that we acquired from the backstage of a show in Germany. But last year it melted. So there is something to that value of ownership, and I think it's something that museums play up."

"The idea that a particular human being touched the object and left a trace," says Webel, "makes it not just another cigarette butt or whatever. It makes the object a cultural treasure. It's amazing."

"It goes beyond, 'Is it real?' or, 'Does it matter if it's real?'" says Hirt, "but that we all believe that it's real and that we believe in its magic."

"We've always lived in contradictions," says Hirt. "Even in that we give performative tours, in character. That hearkens back to the history of collecting that our whole museum is about – the old dime museums, that vaudeville, P.T. Barnum circus-sideshow world. The whole question of: Where does the museum end and real life begin?"

Right. And how much "in character" are the proprietors right now?

"Well, that's hard to say," says Scott Webel, sharper than a narwhal's tooth. "How much in character are you?"

The two curious and industrious artists, the former Tucsonans who've made Austin a home and their home into the delightful Museum of Natural and Artificial Ephemerata: These are the people in your neighborhood.

"Monstrosities" is on display through Aug. 2 at the Museum of Natural and Artificial Ephemerata, 1808 Singleton. For more information, e-mail mnae@mnae.org or visit www.mnae.org. 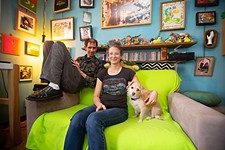