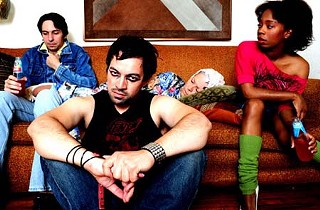 How do I know all this? Because Neulander told the story to a sold-out house as part of his curtain speech on May 30, just before the opening-night performance of Hamilton Township, SVT's world premiere production of the play by Jason Grote, and the last night Neulander would officially serve as the company's artistic director. While I don't know what Neulander is up to now, I do know that Jenny Larson now serves as SVT's interim artistic director, and I also know that if Township, which Larson directed, is any indication, then Salvage Vanguard is in the most capable of hands.

Check this out: A nerd named Jason and a prostitute named Babydoll are drinking Bartles & Jaymes wine coolers in the living room of a house belonging to some old woman, who is asleep on a couch. A storm, laced with copious amounts of thunder, lightning, looting, and fire, rages outside. Babydoll, who is a porn actress as well, will do anything Jason wants because some guy paid her to. See, it's allegedly Jason's birthday, but despite Babydoll's advances, the skull on the back of his jacket, and the somewhat satanic symbol on one knee of his jeans, Jason won't take what Babydoll offers. So they both wait for the guy to arrive who shelled out the cash to Babydoll. The guy, who remains nameless throughout, is off somewhere performing a task for Jason, and when he does eventually show, he makes a surprisingly long, incredibly dynamic, yet entirely wordless entrance, loading a mini boom box with batteries while dancing and lip-syncing to some heavy metal. He also has a present for Jason: a small cardboard container with a single Christmas bow on top. The funny-strange, not funny-ha-ha, thing about the container: Blood appears to be seeping through the cardboard.

Grote sets up his story without apparent exposition, but by the end of the evening, and despite much intentional ambiguity, we pretty much know all we want or could ever care to know about who all of these people are, how they came to be in the house, and why they are there. Larson's direction is invisible, but given how seamlessly the actors execute the staging and tell Grote's story, I have no doubt her hand carefully caressed every turn of the tale. Joey LePage as Jason and Kristen Bennett as Babydoll carry the first 15 minutes or so somewhat nervously, but once Jude Hickey's nameless guy shows up outside some sliding-glass doors looking like he stepped straight out of hell, the show settles down and moves as most SVT shows move: like it was blasted pell-mell from a powerful weapon. Longtime Austin theatre vet Lana Dieterich plays the sleeping old woman, and she never moves. At least, not until she's dead. Then she moves. But I don't want to give too much away. Suffice it to say that, besides the drinking, dancing, and loud, demonstrative sex, there will be blood. And plenty of it.

The more things change, the more they remain the same. A hellish storm may be brewing, and Jason Neulander may have moved on, but inside the walls of SVT, the artists are still producing original, youthful, rocking theatre to make Austin proud. It certainly won't be to everyone's taste, but at least for this palate, Hamilton Township is a rare and delicious slice of performance: funny, frightening, visceral, violent, and totally unforgettable.