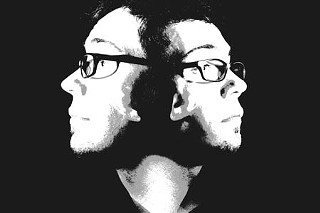 Christian Helms comes at you with everything firing. In fact, the energetic designer is a refreshing surprise. Far from the – imagined – stuffy image of the design professional, Helms is welcoming, jolly, and amiable. Okay, he does have shed-loads of attitude. But it's that kind of creative, fast-paced variety. Just the right intellectual shade of enthusiasm mixed in with some healthy passion about his subject matter. He also has an unpretentious take on art, design, writing, work, life, the universe, and other places.

Helms describes himself as an obsessive sketcher of ideas, drinking buddy, and master breakdancer. He's being modest; there is a lot more to him than that.

One of the founding members of successful Austin-based enterprise the Decoder Ring Design Concern, he is also a talented, if unassuming, creative, and his art speaks for itself.

His work on the packaging of Modest Mouse's We Were Dead Before the Ship Even Sank – which debuted at No. 1 on the Billboard charts in 2007 – is a striking example of his design prowess and creative talent. Artwork which brought him a nomination for the Step Inside Design magazine's Design 100 awards and invitations to speak at schools and conferences across the country, including the prestigious University of Florida's Ligature Design Symposium.

"He said," Helms starts up, referring to Johnny Marr (guitarist for the Smiths and a member of Modest Mouse since 2006), "it was as weird and beautiful as Isaac's lyrics, which is a pretty staggering compliment."

Isaac, of course, is Isaac Brock, frontman of the brilliant and quirky band from Issaquah, Wash.

"With the band's phenomenal growth, Isaac found himself in a situation," Helms reveals. "The deadline was two weeks away, and he hadn't even started thinking about the packaging, so he called us. The next morning, I was on a plane to Portland."

A tough assignment with an extraordinarily short time frame. So how did Helms go about conceptualizing what the client required?

"Listening to the album's contents and conversations with Isaac," he says candidly. "In fact, we had a big geek-out session about aesthetics we both loved and how they could inform the packaging. It was important to create the mood that was specific and a narrative that was vague. All of the great songs are nonspecific enough to allow listeners to find their own stories within the lyrics. We wanted the packaging to do the same." 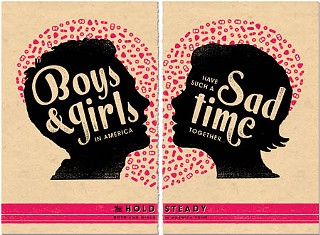 To get his head around what his client needed, Helms stayed with the rock star and his fiancée, Naheed Simjee, for a few days before flying back to Austin.

"We then communicated by PDFs and late-night telephone conversations," he explains. "Along with a truly great collaborative experience, there was a freak blizzard, eight hours spent sitting on a runway, a cab wreck, and a dance party. It would have made a hilarious film."

Actually, the episode does sound more like a synopsis for a Coen brothers movie than a design assignment. But the end justifies the means, and the results are impressive.

The cover artwork highlights a hot-air-balloon-shaped symbol with an anchor incongruously dangling from it. Located on a dark-blue background, a semicircle of exclamation marks in red and light blue are formed around the balloon. Inside, we are led a little deeper into what both the client and the designer were attempting to produce. Beside the traditional blurb and sleeve notes in the interior are long, convoluted gray arms on a yellow background. At the end of the concertina arm is a hand holding a quill pen, an obvious and symbolic gesture to the lyrics. Together, the long, meandering arm and the hand holding the pen symbolize the esoteric, labyrinthine, and deep nature of not only the words but the music as well.

It is art which sets the scene for the band's fans to reflect on the material's key themes and to use their own imaginations to form a conclusion about the music package and the product. Just as Helms intended.

The CD packaging captures that sort of rock strangeness and enigmatic symbolism we expect from a music album. Mood specific, narrative vague, as Helms explained. It is aesthetically cool and attractive to the eye, and the packaging complements the product. It will also intrigue the potential consumer. If these are the parameters for inspired rock-music design, then Helms carries it off.

Helms started out as a journalism major at the University of North Carolina, then went on to study design at the Portfolio Center in Atlanta. Migrating northeast after college, he began his working life as an intern for Michael Bierut at Pentagram-New York. In addition, Helms, 31 and recently married to Jennifer, was also one of the founding members of John Bielenberg's socially conscious design collective, Project M. Based in rural Maine, Helms soon became friends with iconic American designer Art Chantry. An invitation to a design conference, however, brought the young and ambitious designer to Texas, and the seeds were sown for a migration back south.

"I visited Austin when I came down to nearby Texas State University for a creative conference called Creative Summit," he recalls. "I spent an afternoon in Austin with another designer based in New York who was speaking at the conference. We started with tacos at Güero's and proceeded to pinball around the town's best bars and music joints for the day. There was such a great mixture of food, music, and culture that I ended up wondering, 'Why the hell do I not live in Austin?' That was just before spring, and by the fall, I was an adopted Texan."

When the young designer made the decision to seek his future in the Lone Star State, it was his old friend Chantry who suggested he hook up with Geoff Peveto.

"The Decoder Ring started as a collaborative of sorts between myself, Geoff Peveto, and Paul Fucik not long after I moved to Austin," Helms explains. "Geoff and Paul ... had been silk-screening posters for bands for a number of years. I started doing a few promo poster projects with them – early projects were for the Shins, Wilco, and Beulah. The combination of my formal design background and their silk-screen prowess proved to be a good combination, and we were quickly commissioned to do more projects. In addition to posters, I began doing identity packaging and other projects for all sorts of clients. The mission statement was 'to do work for clients we love.'" 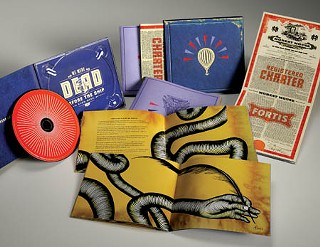 With demand growing, Helms resolved to bin the job and pour his energies into Decoder Ring full-time. One of his first decisions was to recruit his old boss Derrit DeRouen, who became the fourth partner in the design company.

"Derrit's one of the most talented and experienced designers in Austin," Helms says of DeRouen. "He's been part of the creative industry from every angle you can imagine over his career, and he's ridiculously versatile. I've learned a ton from him."

From modest origins among the bands, the surreal frenzy, and 1,000 light-years per second of rock promotion and identity branding, the Decoder Ring Design Concern emerged as a company. And in four short years, it has become an established cornerstone of the Austin business community.

With two strategic yet interrelated wings, labor is divided within the company. The design section is the creative spur of Helms and DeRouen, while Peveto and Fucik look after the print section. As a team, however, all four partners can and do collaborate on projects.

Success, of course, has brought increased demands for the services of the team, hence the 11th-hour call-out to help Modest Mouse. As well as the chart-topping band, the company has designed identity and packaging for a range of clients, including MTV, advertising giant Leo Burnett Worldwide, Boost Mobile, Southwest Airlines, and Toyota.

"I was working on advertising for a new show on HBO," Helms says with some resignation in his voice, "starring Lily Tomlin. It unfortunately died with the writers' strike. However, we are working on the identity and all materials for a new charter airline started by Richard King of Texas' King Ranch family. I've also just finished packaging for What Made Milwaukee Famous, a nationally signed band based in Austin. And I was commissioned to do a huge color illustration for The New York Times, which was a huge honor."

Locally, the company is working on rebranding Stubb's Bar-B-Q restaurant and amphitheatre, as well as the identity and design work – interiors and other elements – for Hoboken Pie in Austin's Red River district and Black Sheep Lodge restaurant and bar on South Lamar.

The Decoder Ring Design Concern has had its offices on Congress Avenue for around three years. But with the company's healthy growth and rapidly expanding client list, the partners have decided to search for a new space and are planning to move in the fall.

Christian Helms impresses with his persistent curiosity and childlike inspiration. He is a designer who can interpret the needs of the client and make them fly. What more could a designer want? PF-Flyers, apparently.

"We talked about fainting goats and footwear," Helms says of a conversation he enjoyed with Johnny Marr. "We were both addicted to PF-Flyers, and they recently discontinued both of the styles we'd each been wearing for years. The difference between being me and being Johnny? Johnny called them up and had them make a signature line, so he could keep wearing them. As we speak, I'm wearing Chuck Taylors."

Self-deprecating? Oh, yes. Creative and talented? Definitely. There's a hell of a lot to like about Christian Helms, the man and his work. 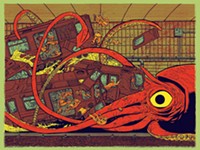