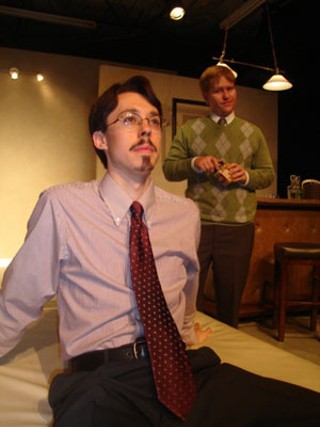 Art can be so subjective. Penfold Theatre Company, with producing partner City Theatre, is resurrecting the play Art for Austin for the first time since it played at Zach Theatre in 2001. For theatre aficionados, seeing Art again is like hearing your big prom song: It was, like, the most profound thing ever at the time, but you sold the CD years ago. Newcomers will discover an unrevolutionary but quality script. As playwright Yasmina Reza makes clear, each shall form his or her own opinions.

The story is that a guy named Serge has purchased a painting for 200,000 francs – about $37,000 when the play was written. As the play begins, he proudly shows it off to his friend Marc, who laughs in his face because the painting is nothing more than a white canvas with some diagonal white stripes across it. Or maybe not. Maybe it's brilliant; maybe it's a masterpiece of modernist painting. It all depends on whom you ask.

Their debate has nothing to do with the ongoing clash between anti-intellectuals vs. cultural elitists in the United States. This isn't the future of the National Endowment for the Arts they're battling over, and nobody's bringing up classic debate points like Andres Serrano's Piss Christ. This is a French play, and these men are fighting about philosophical ideals and their relationship to one another.

For the role of arbitrator, disdainful Marc recruits a mutual friend of his and Serge's: Yvan, an admittedly wishy-washy guy with hypertension and annoying female relatives. Poor Yvan. It's a painting, he thinks. Maybe it cost a bit much, but if Serge wants to spend his money that way, then okay. Which sets off Marc's fury at this betrayal of what he thought were shared cultural values, which frustrates Serge, who believes wholeheartedly in his own elevated tastes and the cleanliness of a nice, white palette. Which devastates Yvan, because he doesn't see how one painting could possibly matter that much when he's got serious life issues at hand, which sends the other two into paroxysms of disgust, and ...

Are you out of breath yet? So are the actors.

Director Steven Pounders, an associate professor at Baylor University, throws all that messy conflict stuff into sharp relief. It's a quick production, coming in under 90 minutes. Fortunately, in all that rush of quick-witted, über-sophisticated sniping, Pounders paints broad swaths of silence across the awkward moments, leaving space for the audience to take in what the three articulators (okay, two articulators and one struggling doofus) are trying to spit out.

It's a superb cast, with Nathan Jerkins particularly strong. The actors perform well as an ensemble, sustaining the balance among the three roles, even as the characters duke it out à la three-way American Gladiators.

This show is, by the way, the first production by the brand-spankin'-new Penfold Theatre Company. Under the leadership of Ryan Crowder (who also plays Marc in Art), Penfold is looking to make a home for itself in North Austin. If Art is any standard by which to judge, then North Austinites may not be getting the damn-the-torpedoes style of original plays that has ruled parts East and South in recent years, but they will find a company of fine actors capable of very fine work.