Underneath its vulgar, profane surface, Bert V. Royal's look at the Peanuts gang as teens still honors its source material 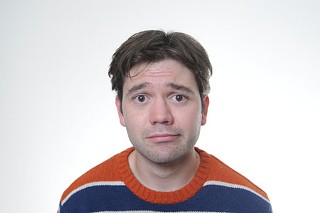 Why is Charlie Brown a good man? What makes him so endearing? Is it that we feel sorry for him or that we admire him? Charlie Brown is not just an everyman; he is an every-loser-man: perpetually failing, perpetually ridiculed, perpetually bossed (by both human and animal). And yet, he is eternally optimistic. It is his buoyancy that earns him a place deep in the heart. Charlie Brown possesses an ability to believe, no matter how delusional it is, that his baseball team will win that next game. He maintains a humble integrity in the face of the derision of his peers. That's quite an impressive feat for a preadolescent.

Dog Sees God reunites the audience with the Peanuts gang a few years in the future. They are now in high school, and things aren't looking good. Playwright Bert V. Royal has evolved (er, devolved) each character to a place far from his or her logical direction. Linus (here known as "Van" – the names have been changed no doubt to protect the playwright from a lawsuit) has become a stoner who repeatedly reminisces about having smoked his blanket. Lucy, informal psychiatrist turned institutionalized pyromaniac, set fire to the hair of the Little Red-Haired Girl. Pigpen ("Matt") has become a germaphobic, homophobic, misogynistic nightmare of an alpha male. Marcie ("Marcy") and Peppermint Patty ("Tricia") are similarly awful, though less harmful: They spend their time drinking White Russians in the cafeteria and making fun of a bulimic classmate. Our guide through this world is, of course, the man himself, here called "C.B." His dog's recent death – Snoopy contracted rabies, killed Woodstock, and was put to sleep – has sent C.B. into a downward spiral of wondering and wandering. He travels from peer to peer, asking, "What do you think happens when we die?" The answers range from Van's ganja-tinged Buddhist theory to Marcy and Tricia's "maggot food!" That's how it always was for Charlie Brown. He had the questions; his friends had the answers. As the show progresses, it veers from the blatant entertainment of caustic parody to the sticky realm of afterschool specials. The plot dabbles with sexual confusion, bullying, suicide, and threesomes. Fortunately, when the script gets thin, this production manages to keep on keeping on.

Hyde Park Theatre's staging is strong on all fronts. Ken Webster's direction makes potent a script that risks becoming clichéd. Paul Davis' set design is a wonderful rendering of the original comic-strip world, complete with a likeness of Charlie Brown's famous zigzag shirt painted on the stage floor. Even the music between scenes is amusing, smashing together the Charlie Brown theme with the likes of Outkast. The cast is an excellent ensemble, nailing the jokes but also finding the quiet moments between guffaws. Tom Coiner is our C.B. and, much like the original Charlie Brown, is at times disconnected and alienated, at times vibrant and brave. The chemistry between Coiner and Daniel Adams as Beethoven (Schroeder) makes for some rocking scenes (picture the Peanuts gang dancing for joy). As Matt, the homophobe who doth protest too much, Benjamin Summers is a fiercely focused villain. Kayla Newman is the sensible little sister foil to Coiner's C.B., and her one-woman play-within-a-play is a treat. Noah Neal, Bethany Esfandiari, Xochitl Romero, and Michelle Keffer round out the cast, earning some of the show's best laughs with their always ridiculous and sometimes lovable characters.

In his review of a New York City production, Matthew Murray wrote that Dog Sees God "evinces not a shred of love or respect for, or understanding of, the original." That is an easy but inaccurate assessment. Remember how mean those kids were in Schulz's world? It only makes sense that they would be similarly cruel when thrust into Royal's version of the real world. And though the play revels in gratuitous profanity and vulgarity, underneath the caustic surface is an honoring of the source material. Charlie Brown is still full of questions and existential crises. Linus is still philosophical. Schroeder still faithfully plays his piano while people talk at him. Lucy is still full of unsound advice. At the show's end, Royal, in all his unauthorized glory – the play was not approved by the Charles M. Schulz estate – has the gall to write a letter from Creator to Creation. And a beautiful letter it is, one that sums up the show in a manner bizarrely reminiscent of the comic strip's essence, staying true to Schulz's overriding message: To thine own self be true, Blockhead!